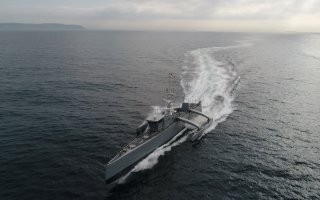 Here's What You Need to Know: The 135-ton ship is engineered to withstand rough seas up to Sea State 5–or waves up to 6.5 feet.

The ship is built to travel up to 10,000 miles while using sonar and other sensors to locate mines and even the quietest enemy submarines. The Sea Hunter’s high-frequency sonar can send acoustic “pings” into the ocean before analyzing the return signal to determine the shape, size, speed and characteristics of any undersea enemy activity.

The 135-ton ship is engineered to withstand rough seas up to Sea State 5–or waves up to 6.5 feet. The 132-foot drone uses advanced hydro-acoustics, pattern recognition and algorithms for unmanned navigation to locate and shadow diesel-electric enemy submarines. The idea is to track them, if necessary, over a period of months so they are compelled to stay away from strategically vital areas.

The Navy has been extending testing of its sub-hunting drone to ensure it can travel autonomously for up to ninety days using sensors and sonar technology to search for enemy submarines, airborne dangers and undersea mines.

Progress with the Sea Hunter has involved replacing a turret on top of the drone with a range of sensors for ISR, surface-oriented technologies, weapons and electronic warfare systems, Navy developers have said.

As technology has evolved in recent years, the Navy has been migrating the Sea Hunter’s operational scope from something that is teleoperated to something that can increasingly perform a wider range of functions without needing human intervention.