See This Plane? It Was the Navy Spearhead for Fighting Nuclear War 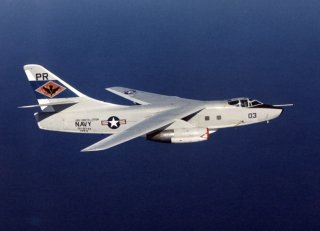 Here's What You Need to Remember: The Skywarrior’s losses didn’t change the fact that the ‘Whales’ saved hundreds of pilots, who would never have made it back to safety without their aid, to the extent that Skywarrior squadrons kept individual tallies of their rescues.

Lt. Commander Dick Schaffert knew he was in deep trouble as he slew his F-8C Crusader fighter towards the Gulf of Tonkin on July 18, 1967. He had burned through fuel dodging missiles and anti-aircraft fire while assisting attempts to rescue two downed Skyhawk pilots in Vietnam. Now he’d be lucky to get his fighter “feet wet” (over the water), let alone back to the deck of his carrier Oriskany.

Rick Morgan describes the action in his book A-3 Skywarrior Units of the Vietnam War:

“Maxwell flew his aircraft 30-40 miles inland and started a hard right turn in front of Schaffert’s F-8, while his bombardier/navigator extended the refueling hose. While all of this was taking place, random flak bursts were going off nearby, and the crew radar warning gear blared in their ears, indicating surface-to-air missile activity in the area.”

The Crusader’s probe slotted into the drogue “basket” trailed by the Skywarrior on the first attempt (see what that looked like here) and began sucking in fuel.  The two aircraft remained plugged together all the way to the coast and safely landed on the Oriskany.

Schaffert’s Crusader was only of an estimated 700 aircraft saved by the timely intervention of a Skywarrior tanker.

The Douglas A-3 Skywarrior—descriptively nicknamed the ‘Whale’—was the largest combat aircraft routinely catapulted off and recovered on the deck of an aircraft carrier. Originally designed to perform near-suicidal nuclear bombing missions targeting the Soviet Union, over 35 years of service the many Skywarrior variants ended performing just about every other conceivable mission: dive-bombing, aerial refueling, carrier onboard delivery, jamming, photo-reconnaissance, electronic surveillance, VIP transport, and aggressor training. This article focuses on its bombing and tanking use.

Post-World War II, the Pentagon was convinced that nuclear weapons had made conventional warfighting capabilities obsolete. To secure a cut of the defense budget, the Navy planned to build a gigantic United States-class supercarrier capable of deploying strategic bombers hefting nuclear bombs—even if there was little rationale (and considerable expense) to base these at sea.

While the Navy acquired the piston-engine AJ Savage bomber as a nuclear-strike stopgap, a jet-powered bomber was necessary to avoid speedy Soviet interceptors. The Navy, therefore, solicited Douglas and Curtis-Wright for a 50-ton carrier-based jet bomber.

However, Douglas’s Eddie Heinemann, legendary designer of the A-4 Skyhawk, counter-proposed a 34-ton jet bomber that could fly off aircraft carriers already in Navy service. This proved farsighted as the United States-class carrier was canceled within days of being laid down, securing the win for Douglas.

Heinemann’s A3D Skywarrior weighed 20 tons empty and could carry up to six tons of weapon. The jet had fuel to fly missions up to 2,100 miles away or 1,300 fully loaded. These capabilities led the initially scornful Air Force to procure 294 of its own version, the B-66 Destroyer. Up to twelve JATO rockets could be used to boost a heavily laden A-3 during takeoff.

A pilot and bombardier/navigator sat side-by-side in the cockpit, while a crewman/navigator faced rearward and operated a 20-millimeter twin-barrel defensive tail-cannon. Ejection seats were omitted to save weight, so the crew had to slide down an escape chute should it become necessary bailout, leading to the grim joke that A3D stood for “All Three Dead.”

The A3D-2 (re-designated A-3B) was the main production model, featuring more powerful J-57P-10 engines bumping maximum speed to 620-640 miles per hour, and ditching the anachronistic tail gun for an electronic counter-measure fitting. Most consequentially, the Skywarrior now had a side-mounted aerial refueling probe—and a kit allowing it to refuel other aircraft too.

In 1958 a Skywarrior set the record for the heaviest catapult takeoff weighing a massive 42 tons catapulting from the Saratoga. But just because the Whale could fly off carrier decks didn’t mean operating such a large jet was easy or safe: through 1960, 27 Skywarriors were lost in accidents.

In this video, you can see an A-3 expertly crash land after snapping its nose wheel. Not all such mishaps ended so well, as you can see in this recording of a fatal crash in 1960 due to a snapped arrestor hook.

Ultimately, of 283 Skywarriors of various models built, around 120 (42%) were destroyed or crippled in accidents and combat. In 67% of accidents, at least one crew member died.

The A-5 Vigilante supersonic bomber was slated to replace the Skywarrior in the 1960s. But the advent of the Polaris submarine-launched nuclear missiles caused the carrier-based strategic nuclear mission to evaporate—but not the bombers built to perform it.

Starting in 1964, Skywarrior heavy attack squadrons VAH-2, -4, -8, and -10 were all swiftly involved in the Navy’s growing combat role in Vietnam. The big nuclear bombers could carry naval mines and 500-, 1,000- and 2,000-pound bombs in their bomb bays, after all, and were assigned lightly defended targets.

But, as the A-3’s radar-directed level-bombing sight was ill-suited for hitting precise targets in the jungle, pilots improvised dive-bombing tactics, using markings etched in a grease pencil or the tip of the refueling probe as reference points.

Of the eighteen U.S. Navy carriers that served in Vietnam, sixteen carried Skywarriors—sometimes large squadrons of eight to twelve aircraft, but more commonly detachments of three or five. Leveraging the A-3’s abundant range, some air wings detached Skywarrior to principally operate from land bases at Cubi Point in the Philippines and Da Nang, Vietnam to free up deck space, often ferrying personnel, cargo and mail back to the carrier during their occasional visits.

The Skywarriors’ ability to refuel agile jets assigned more dangerous raids rapidly proved more useful than its service as a crude bomber, as an A-3 tanker could carry three times more fuel than a refueling-configured A-4 or F-8 jet.

By 1968 Skywarrior bombing missions petered out entirely, and 85 A-3Bs were permanently modified to serve as dedicated KA-3B tankers. Land-based U.S. Navy Reserve tankers squadrons VAQ-208 and VAQ-308 also supported operation over Vietnam and even helped fuel A-4 jets delivered to Israel during the Yom Kippur War.

Skywarrior pilots help pioneer enduring methods in naval air-refueling. Typically a KA-3 was first off the deck during a launch cycle, and as other aircraft catapulted off the flattop, would juice each up with two to three thousand pounds of fuel.

Mission tankers accompanied strike packages, stopping to loiter just outside the range of enemy air defenses. Their pilots then listened to radio traffic to figure out which aircraft would need emergency refueling on the return trip. Damaged aircraft sometimes leaked fuel nearly as quickly as the ‘Whales’ could fill them up, requiring shepherding all the way back to the carrier.

Finally, recovery tankers kept Navy jets from running dry as they awaited their turn to land on a carrier. Skywarrior pilots would position themselves so that jets that missed an attempted landing could easily pull up behind a KA-3 for emergency refueling.

An A-3B pilot ‘Red Baron’ John Wunsch of VAH-4 used its tanking capabilities in a decidedly unusual fashion while stationed aboard the carrier Bon Homme Richard.

After an aggressive Soviet trawler forced Richard to abort aircraft recovery, Wunsch took matters into his own hands as described in Morgan’s book:

“Wunsch also saw the offending communist ship right off his nose, so he leveled off at about 100 ft and turned on the fuel dumps. Aviation fuel poured from the wings and centerline as the “Whale” overflew the trawler, covering it in JP-5. The [ship] reportedly went dead in the water as crews hurriedly broke out fire hoses to wash down their ship before a stray spark started a conflagration. They also decided to leave the carrier alone for the time being, and the “Whale” subsequently recovered.”

A-3 pilots faced plenty of danger even when not dropping bombs. On April 12, 1966, a Chinese J-6 fighter shot down an A-3B transiting to the carrier Kitty Hawk, killing all four aboard. Another was lost during a night-time mining mission in 1967. But the chief killer of Skywarriors remained carrier takeoffs, with many suffering collapses of the nose gear or catapult bridle with fatal consequences. Thus Skywarrior tankers were replaced by smaller KA-6D Intruder jets.