The SR-91 Aurora Was a Real Plane, Just Not the One We Thought 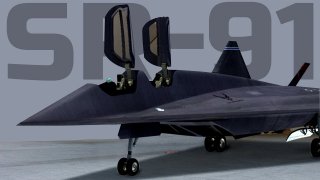 Here's What You Need to Know: In Skunk Works, a 1994 book written by Ben Rich, the legendary Lockheed department’s former director, he indicated that “Aurora” had been a codename for the B-2 Spirit, which took its first flight in the late 1980s and entered service in 1997.

The SR-71 Blackbird, which first took to the skies in 1964, was for decades the world’s fastest plane, setting an official record of 2,193 miles per hour—more than three times the speed of sound—over straight and level flight in 1976. Anecdotal reports by the plane’s pilots have suggested that this speed has been exceeded while the plane was in active service, although the details of the surrounding circumstances, of course, are not public knowledge.

However, the SR-71, revolutionary in the 1960s, was marginally less so in the 1980s, and the U.S. military allegedly looked for a design that could supplant it as it entered retirement. The Pentagon remained close-lipped about this process, but outside observers speculated that, given the technology at the U.S. Air Force’s disposal, a plane could be created that could travel at hypersonic speeds of up to Mach 5. Given this, some observers contended that such a plane was probably already in development. It wasn’t until March 1990, however, that the aircraft magazine Aviation Week & Space Technology announced that $455 million had been allocated for “black aircraft production” in 1987. It also announced similar obscure funding in 1985 for a project titled “Aurora”—seeming to confirm the suspicions.

The document was authentic, and “Aurora” was a real plane—but it wasn’t the plane that everyone thought it was. In Skunk Works, a 1994 book written by Ben Rich, the legendary Lockheed department’s former director, he indicated that “Aurora” had been a codename for the B-2 Spirit, which took its first flight in the late 1980s and entered service in 1997.

The rumors, however, ended up diverging in an altogether different direction; they postulated the existence of a strange, isosceles-triangle-shaped plane that could travel at hypersonic speeds. The rumors of the plane’s existence, based on snippets of radio chatter and alleged sightings in southern California and Nevada, were also tied closely to Area 51, the government’s air test range at Groom Lake—and the subject of its own myriad conspiracy theories.

But the notion that the government was testing a hypersonic plane was utterly false. “Although I expect few in the media to believe me,” Rich wrote in 1994, “there is no codename for the hypersonic plane because it simply does not exist.”

In fact, the fate of high-speed spy planes declined sharply after the fall of the Berlin Wall and the dissolution of the Soviet Union. The end of the Cold War marked an end to limitless defense spending, and the functions that these planes had - namely, flying over enemy territory to photograph sensitive areas - could soon be done, at a lower cost and with considerably less danger, by spy satellites.