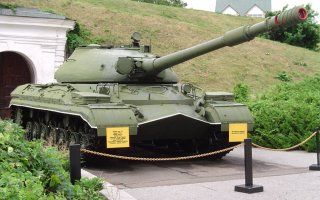 Here's What You Need To Remember: The T-10 was actually better in some ways than the newer tanks, perhaps simply due to its size. The stabilizer was more effective than the T-62s, and of course the high caliber coaxial and commander weapons fit is nothing to scoff at. These aspects would likely have made it a force to be reckoned with on the breakthrough in the 1960s when ATGMs were still in their infancy.