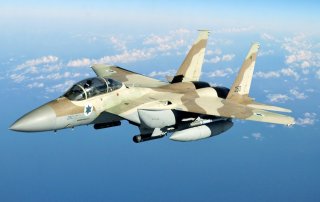 Here's What You Need To Remember: Despite moving to acquire the Lockheed Martin F-35 Adir platform (also tailor-made to Israeli specifications), Israel additionally decided to upgrade their F-15 fleet in 2016.

Caleb Larson is a defense writer for the National Interest. He holds a Master of Public Policy and covers U.S. and Russian security, European defense issues, and German politics and culture. This article first appeared in July 2020.