Study This Picture: The Air Force Was Doing More Than Just Showing Off 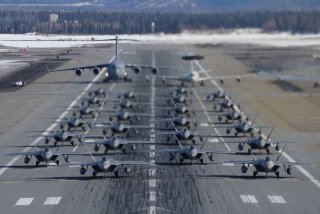 Here's What You Need to Remember: A U.S. Air Force wing in Alaska managed to launch 24 F-22 Raptor stealth fighters plus an E-3 radar plane and a C-17 transport, all in quick succession.