Suffren: France's New Submarine Has All the Makings of a Terror 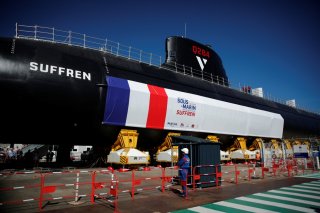 Here's What You Need to Remember: The Barracuda series will provide the French Navy with a real combat superiority and for the first time enable a deep strike capability via MBDA naval cruise missiles (NCM). The vessel can be equipped with F21 heavyweight wire-guided torpedoes and modernized Exocet SM39 anti-ship missiles. Each submarine can accommodate a crew of sixty-five sailors plus Special Forces.

The French Navy reached an important milestone in its Barracuda program, as it took delivery of the first of six Suffren-class nuclear attack submarines (SSN). The 99-meter long submarine was delivered from the French-based shipbuilder Naval Group to the French Armament Procurement Agency (Direction Générale de l’Armement, DGA) earlier this month after the completion of a series of sea trials.