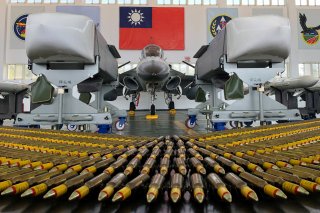 Here's What You Need to Remember: Against Taiwan’s defenses, the Chinese People’s Liberation Army — the PLA — can quickly muster hundreds of modern fighters, attack planes, bombers and attack helicopters — not to mention a thousand short- and medium-range ballistic missiles that could pulverize Taiwan’s air bases and military installations, including fixed radar and surface-to-air missile sites, in the early hours of a war.

Three years ago Taiwan stocked up on air-defense missiles that, in a land-based role, probably wouldn’t make a dent in Chinese invasion forces during a major war. But the missiles could prove more useful at sea.

The U.S. Defense Department announced on Dec. 9, 2016, that the U.S. Army had awarded an Alabama-based company $23 million to build components for the Taiwanese military’s Chaparral air-defense missile systems.

The contract award was routine. What was news to many observers is that Taiwan still operates Chaparrals. The 1960s-vintage missiles probably can’t do much to stop Chinese aircraft in the event China invades the island country.

The U.S. Army launched the development of the MIM-72 Chaparral air-defense system in 1965 after a more ambitious surface-to-air missile launcher, the MIM-46 Mauler, proved to be impractical.

The Chaparral was an expedient. It borrowed the U.S. Navy’s AIM-9D Sidewinder infrared-guided air-to-air missile and mounted it in a quad-pack atop a modified M-113 armored vehicle.

Technically, the launcher is an M-48. The missile is an MIM-72. But in practice, most people use “Chaparral” and “MIM-72” interchangeably to mean the overall air-defense system.

Paired with M-163 Vulcan vehicles armed with 20-millimeter rotary cannons — plus, in some cases, MPQ-49 radars — the Chaparrals were supposed to protect Army troops along the forward edge of the battlefield, where Soviet attack helicopters and low-flying close-air-support jets were a big danger.

But the Chaparral suffered serious limitations. The Sidewinder missile had a range of only five miles under the best of circumstances. And while later versions of the missile could track a target from all angles, it always worked best while chasing an enemy aircraft from behind. That gave the missile’s seeker head the clearest view of the hottest parts of the target—its engine exhaust.

An attack helicopter popping up from behind some trees could strike quickly then pop back down, masking it from view before a Chaparral crew could slew its launcher and fire.

The U.S. Army bought more than 600 Chaparral systems and fielded them between 1969 and 1998, when various versions of the Stinger missile finally replaced them. Today the Pentagon is working on mobile lasers to replace the Stingers.

But Taiwan, a country of 23 million people with a military budget of just $10 billion, is stuck with the Chaparrals it bought starting in the early 1980s. Taipei acquired as many as 90 launchers plus hundreds of missiles — and also bought a naval version of the Chaparral for its small fleet of frigates.

Taiwan’s Chaparrals are part of an air-defense system that also includes around 300 fighter jets plus Stingers, long-range Hawk and Patriot missile batteries and the indigenous Sky Bow missile — all cued by a network of powerful radars.

But this air-defense system might not be sufficient to stop a Chinese invasion. Taiwan lies just 100 miles from mainland China, which officially considers Taiwan to be an illegal, breakaway province — and has threatened to invade in the event that Taipei formally declares its independence.

Against Taiwan’s defenses, the Chinese People’s Liberation Army — the PLA — can quickly muster hundreds of modern fighters, attack planes, bombers and attack helicopters — not to mention a thousand short- and medium-range ballistic missiles that could pulverize Taiwan’s air bases and military installations, including fixed radar and surface-to-air missile sites, in the early hours of a war.

The Chaparrals couldn’t do much to stop this aerial assault. When the RAND Corporation, an influential American think tank, assessed Taiwan’s air-defense system in 2016, the analysts didn’t even mention the Chaparrals by name — and were dismissive of the systems’ ability to stop Chinese air raids in the aftermath of a ballistic-missile barrage.

“The completion of the attacks on the long-range SAMs would dramatically decrease the danger to any PLA aircraft operating over Taiwan, which could fly at a higher altitude than the remaining short-range SAMs and air-defense guns could reach,” RAND noted. “This would enable an efficient attack on Taiwan’s air bases following ballistic missile attacks to cut the runways and trap aircraft that are not already in the air.”

RAND advised Taiwan to spend less money on vulnerable — and outnumbered — fighter planes and instead invest in new air-defense platoons equipped with new, mobile radars and missiles that could hide in forests and among hills and emerge after the ballistic missiles stopped falling. The think tank assumed these platoons would not use the existing Chaparrals.

Perhaps the most interesting Taiwanese application of the Chaparral is at sea. In 2015 the Taiwanese navy took delivery of a new, 20,000-ton-displacement supply ship named Panshih. In contrast to most of the world’s naval supply ships, Panshih is heavily armed — with, among other weapons, Chaparral missiles.

That means the vessel, which has hangar space for three helicopters, could double as a kind of poor-man’s amphibious assault ship during a naval war in the hotly-contested, and dangerous, China Seas.

David Axe served as a defense editor for the National Interest. He is the author of the graphic novels  War Fix, War Is Boring and Machete Squad. This article was first published in 2019.