Thanks to the French Foreign Legion, the MAT-49 Has Fought Around the World 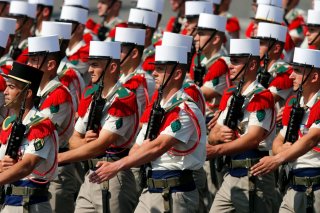 Here's What You Need to Remember: Despite the MAT-49’s limited range it’s cheap construction and rugged design kept it relevant for over a generation, in some of the world’s most rugged conditions.

The MAT-49 was designed to replace the compact but decidedly underpowered MAS-38, a pre-World War Two submachine gun designed in France and issued as an alternative standard-issue weapon to German troops after the fall of Paris.

Though not made for exclusively French Foreign Legion service, the MAT-49 was particularly well-suited to meet their needs. Small, light-weight, compact, and with a thirty-two-round magazine capacity, the MAT-49 was a paratrooper’s dream. As it was chambered in the ubiquitous 9x19mm Parabellum, it offered greater range and stopping power than the MAS-38’s interesting but diminutive 7.65x20mm Longue pistol cartridge. Wide-spread 9x19mm use meant that captured ammunition could be used with the submachine gun, potentially simplifying logistics. A neat video of the MAT-49 can be seen here and is worth the watch.

The submachine gun’s wire buttstock was inwardly collapsible. Not only that, but the weapon’s magazine well and magazine could collapse forward for storage—of utmost importance when snagging on clothing should be avoided at all costs, such as when parachuting out of a plane.

The large magazine well also doubled as a forward grip and had finger grooves stamped into it, assisting control by reducing muzzle climb during fully automatic firing. Though the MAT-49 lacked a fire selector, it had a prominent grip-style safety lever, preventing the submachine gun from firing when the rear grip was not firmly held.

Economy was one of the MAT-49’s crucial design features, and to that end it incorporated a number of stamped steel parts, rather than time and money-consuming machined parts. At just over nine inches, the barrel wasn’t particularly long, limiting effective range perhaps 150 meters. In any case, the weapon’s sights were only marked to 50 and 100 meters.

MAT-49 production lasted from 1949 to 1979 and during that thirty-year timespan approximately 700,000 units were manufactured. In addition to the standard MAT-49, several hundred variants, called MAT-49-54, were built for various French police units. These police units had a longer, nearly 14.5-inch barrel and a fixed wooden buttstock. They also had a unique trigger mechanism in which two triggers were installed, one for fully automatic firing and a second trigger for semi-automatic.

Perhaps the theaters where the MAT-49 saw most service was during France’s post-World War II colonial conflicts, especially in Algeria and Vietnam. Though difficult to independently confirm, North Vietnamese soldiers may have rechambered the MAT-49 for use with the Soviet Union’s standard-issue 7.62×25mm Tokarev cartridge.

In 1979 the MAT-49 was discontinued, as the standard-issued French firearm, the FAMAS, superseded it. Chambered in 5.56mm NATO, the FAMAS offered much greater performance for similar mass. The MAT-49 is still issued in limited numbers today among some former French colonies, though by modern standards it remains rather underpowered.

Despite the MAT-49’s limited range it’s cheap construction and rugged design kept it relevant for over a generation, in some of the world’s most rugged conditions.

Caleb Larson is a Defense Writer with the National Interest. He holds a Master of Public Policy and covers U.S. and Russian security, European defense issues, and German politics and culture. This article first appeared last month and is being republished due to reader interest.