These Russian Submarines Can Start A War And Never Leave Port 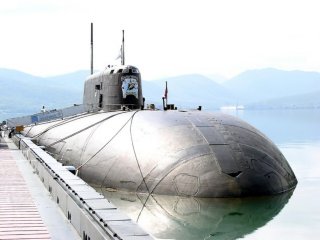 Key Point: “The sailors of the Northern Fleet successfully launched launches of the Kalibr cruise missiles, without leaving the open sea, directly from the berth wall"

Thus, Russian subs can fire their weapons more quickly, without the need to sail into open water. But more ominously, because subs abruptly leaving port is considered a warning sign that hostilities are imminent, the ability to launch missiles while dockside makes a surprise attack easier.

The submarine Severodvinsk, part of the Russian Navy’s Northern Fleet, launched a Kalibr missile while in port. “Previously, launches with a submarine moored to the pier were impossible, since in this position a number of units and systems do not work,” according to Izvestia. “However, the completed shooting showed that this technical problem has now been resolved.”

“The sailors of the Northern Fleet successfully launched launches of the Kalibr cruise missiles, without leaving the open sea, directly from the berth wall. The teachings showed that a submarine, even caught off guard, would be able to effectively carry out its combat missions. In the future, such exercises will be included in the compulsory combat training program of all submarine crews with cruise missiles on board.”

“The possibility of launching cruise missiles directly from the berth significantly increases the combat effectiveness of submarines. The fleet does not always have the time to deploy, which is necessary for the ships to move away from the pier and proceed to the pre-planned area of ​​attack. Submariners should be able, if necessary, to use their main weapon right there, without departing from the pier.”

Interestingly, Kurdin told Izvestia that portside-launched missiles could be used by subs operating from the Russian naval base in Tartus, Syria. “Such opportunities for submarines will be especially in demand in hot spots around the planet. In particular, the submarines located at the logistics center in the Syrian city of Tartus should be able to support ground forces with fire at any time.”

The nuclear-capable Kalibr fired by the Severodvinsk is the Russian Navy’s journeyman subsonic land-attack cruise missile, akin to America’s Tomahawk. Carried by a variety of surface ships and submarines, the basic model has an estimated range of about 1,000 to 1,500 miles, though the upcoming Kalibr-M will have a range of almost 3,000 miles.

From Russian ports, that’s too short a range to strike the continental U.S., which would probably be targeted by sub-launched ballistic missiles anyway. But Western Europe, Scandinavia and Japan are well within range.

“Theoretically, the Kalibr missile launched from a Yasen-class submarine moored at the base in Zapadnaya Litsa can reach targets in most areas north of the Arctic Circle in northern Norway, Sweden and Finland within minutes,” noted the Norwegian newspaper Barents Observer.

However, while launching cruise missiles from port may be useful in terms of speed, command and control and logistics, one drawback is that it is also suicidal. Submarines survive by quietly hiding in the vastness of the oceans. A missile launched from a fixed location like a pier would pinpoint the sub’s location. Unless the sub left port quickly and submerged, it would be vulnerable to attack.