With These Weapons, Russia Almost Destroyed This City 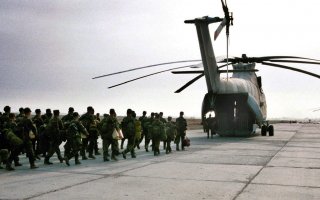 Here's What You Need to Remember: Finally, the Russian military threatened to destroy what’s left of Grozny with strategic bombers and ballistic missiles--which reportedly had not been used up to that point--if the Chechen fighters did not withdraw from the city.

Yeltsin’s Cabinet, and some in the Russian military, forecasted a “bloodless blitzkrieg,” followed by swift Chechen capitulation and regime change. But, as it turned out, Russia’s harried and disorganized military lacked the training and equipment for the kind of surgical operation envisioned by the government. Instead, masses of T-72 and T-80 main battle tanks (MBT’s), as well as BMP-2 infantry fighting vehicles (IFV’s), rolled up the Chechen capital of Grozny.

Those early successes would be the last of Yeltsin’s easy victories in the Chechen War. The Russian troops entering Grozny were not only woefully unprepared for urban warfare but were undertrained even by basic infantry standards. Heavily armored vehicles like MBTs were all but useless in these densely packed, highly elevated environments. Chechen guerilla outfits imposed substantial costs on the advancing Russian forces, destroying Russian armored personnel carriers (APC’s) with relative ease.

Thwarted at every turn, the Russian military became increasingly reliant on artillery fire, mortars, and carpet bombing runs to pound Grozny into submission. What followed was the most intense bombing campaign in Europe since 1945. Not known for their precision,  BM-27 Uragan and BM-21 Grad rocket launchers failed to effectively neutralize Chechen combatants--they did, however, level large swathes of the city while killing thousands of civilians.

Russian troops finally took Grozny on the heels of around 25,000-35,000 civilian casualties, but a small group of Chechen fighters infiltrated and recaptured portions of the city, inflicting devastating defeats on Russian armored columns in the process. Russian guided missile strikes killed Dudaev in 1996, but fierce Chechen resistance continued even as Russian discontent with the war effort and the Yeltsin administration grew.

Finally, the Russian military threatened to destroy what’s left of Grozny with strategic bombers and ballistic missiles--which reportedly had not been used up to that point--if the Chechen fighters did not withdraw from the city.

The bombardment began as planned, but was cut short by a sudden ceasefire. Russian and Chechen negotiators could not find a permanent arrangement for Chechnya, instead of settling for a makeshift solution that delayed a final agreement to 2001. The ceasefire turned out to be little more than an interlude to the Second Chechen War that broke out under the Yeltsin government in 1999 and bled over into Putin’s presidency. Concrete figures remain elusive, but estimates of dead or missing Chechen civilians begin at around 30,000 and creep all the way up to 100,000. Meanwhile, Russian military casualties are reportedly as high as 50,000, while Chechen military casualties range from 3,000 to downwards of 18,000.

The implications were immense: the First Chechen War is not only among the darkest chapters in Russian military history but dealt a crippling blow to the popularity of the Yeltsin government and set the stage for another decade of Russian-Chechen conflict.