Thousands of People Died In this Battle During the Korean War. Did They Have To? 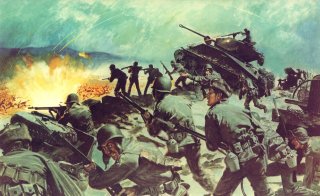 Key Point: The bloody battle was a last-ditch attempt to build leverage for peace negotiations.

Image: Illustration cropped from a U.S. Army poster depicting the Battle of Chipyong-Ni, a part of the Korean War. Public domain.