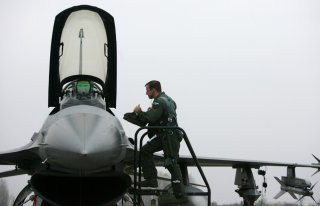 Here's What You Need to Remember: Sofia put out a tender for new fighters to eventually replace the MiG-29s. The government in the summer of 2019 approved a $1.2-billion deal with the United States to acquire eight new F-16 Block 70s plus spares and support equipment.

In the summer of 2016, the cash-strapped Bulgarian air force nearly collapsed amid political squabbling in the capital Sofia. With a yawning air-defense gap forming on its southeastern frontier, NATO intervened — and assigned an F-15 squadron from the California Air National Guard to fill in for the Bulgarians’ own dysfunctional air arm.

The Bulgarian air force had worked hard to maintain around 100 old Soviet-era aircraft, including nine MiG-29 fighters — of which only four were flyable— and a dozen Su-25 attack planes. Money was tight. Training and operational flights were few and far between.

The government repeatedly pledged to boost the air force’s funding — and, according to critics, repeatedly broke that promise. Realizing its own air force could not effectively patrol its air space, in February 2016 the Bulgarian parliament approved a measure requesting NATO assistance.

The transatlantic military alliance routinely deploys fighter squadrons to patrol over Iceland and the Baltic states, which lack their own fighter planes. The arrangement with Bulgaria extends NATO’s “air-policing” duties to a country that does, in fact, have its own fighters — but which can’t seem to sustain them.

Incensed at what he claimed was a lack of support, on Aug. 1, 2016 Maj. Gen. Rumen Radev — then the Bulgarian air force’s commander and an active MiG-29 pilot — resigned in protest. The vocally pro-Russia Radev promptly went into politics and, in November 2016, won the election to become the country’s next president.

In the meantime, the U.S. Air Force had deployed the 194th Fighter Squadron — part of the California Air National Guard — to Europe starting in April 2016. The deployment fell under the umbrella of the Pentagon’s Theater Support Package scheme, which rotates U.S.-based forces to Europe to deter Russian aggression.

The 194th sent four F-15s to Iceland for air-policing and eight of the venerable, twin-engine jets to Romania for training. With Radev’s resignation only deepening the Bulgarian air force’s woes, in August 2016 NATO asked the Americans to help out. The 194th quickly sent four of the F-15s then in Romania to Graf Ignatievo in Bulgaria, from where they could patrol Bulgaria’s Black Sea border.

NATO and the Pentagon put a happy face on the rushed deployment. “It’s important that we are standing side-by-side with our NATO allies,” Lt. Col. Cesar Gonzalez, the 194th Fighter Squadron aircraft maintenance commander, said in a statement. “We are committed to the security of Europe and helping Bulgaria and countries who ask for our help.”

In fact, the F-15s’ mission to Bulgaria both exacerbated — and helped to put a salve on — deep political division in the country … and in NATO. Radev’s election as president dovetailed with the rise of pro-Russia, and nominally anti-NATO, leaders across the alliance. Most notably, Donald Trump in the United States.

The California fighters returned to the United States in October 2016. Facing a new and uncertain era with Radev’s election, the Bulgarian Ministry of defense scrambled to acquire 10 spare engines worth $20 million for the air force’s MiG-29s. In an apparent passive swipe at Radev, the ministry claimed the fresh engines were proof that “propaganda claims that the air force will be grounded” were untrue.

Sofia put out a tender for new fighters to eventually replace the MiG-29s. The government in the summer of 2019 approved a $1.2-billion deal with the United States to acquire eight new F-16 Block 70s plus spares and support equipment. The F-16s are due to arrive in Bulgaria before the end of 2022. Sofia signaled it might add another eight jets to its order

This article first appeared in April 2020 and is being reprinted for reader interest.