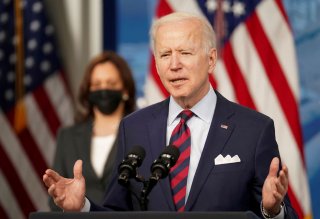 Here’s What You Need to Remember: Within two months of the signing of the American Rescue Plan – the new administration’s initial $2 trillion COVID-19 relief bill – President Joe Biden has already set his sights on bigger things. Last Wednesday, on the eve of his hundredth day in office, he announced two new spending plans – the “American Jobs Plan,” which would focus on creating new jobs, and the “American Families Plan,” which would focus on alleviating poverty and placing money directly into American families’ hands.

Of the two plans, the second is far broader in its ambitions – it contains a long checklist of welfare programs, including free community college, universal pre-K education, an expansion of the Child Tax Credit, and subsidized childcare.

Here’s what it left out.

Student Loan Forgiveness. Student loan debt in the United States hovers at around $1.7 trillion, with the average loan size at approximately $30,000 – making student loan debt a larger problem than auto loans and credit card debt. One of Biden’s campaign proposals involved canceling $10,000 in debt for all students. Other progressive sources have proposed higher numbers.

However, it is unclear if the president actually has the authority to unilaterally cancel the debt with the stroke of a pen. There is also the matter of how to compensate the creditors, who would either stand to lose billions of dollars overnight or else be compensated through taxpayer money.

A $15 Per Hour Minimum Wage. In recent years, the issue of a $15 per hour minimum wage has pushed to the forefront of – in part due to the influence of Bernie Sanders’s 2016 presidential campaign. The measure has been enacted locally in a number of local areas, and Biden passed an executive order mandating a $15 per hour minimum wage for federal contractors. However, not all Democrats are in favor of the proposal; some, including Senator Joe Manchin (D-W.V.), favor a lower, $11 per hour proposal.

A Fourth Stimulus Check. Speculation has surrounded the idea of a fourth stimulus check, with many Democrats in favor of recurring payments for the duration of the pandemic. However, Biden did not address this idea in his speech on Wednesday night.

All of these things remain progressive priorities, and Biden will likely try to address them later in his term. However, it is crucial to remember that, even in its restricted form, the American Families Plan’s goals are simply ambitions. And the plan is not likely to pass Congress, at least not without significant alterations. It is unclear if all fifty Senate Democrats support the measure. Even if they did, Senate Minority Leader Mitch McConnell was quoted as saying that Senate Republicans were “100 percent committed” to fighting Biden’s agenda, suggesting that the plan would not be able to pass without filibuster reform.

In reality, though, if congressional horse-trading works the way it has always worked, McConnell’s “100 percent” opposition will probably translate to a smaller plan with fewer benefits – but also one that is less likely to break the bank.