Tsar Bomba: A Nuclear Bomb This Big Is Only Good for Destroying the World 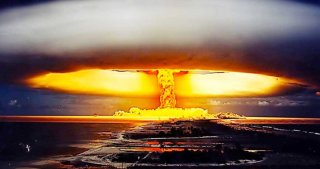 Here's What You Need to Remember: After the test was completed, U.S. officials were quick to condemn this show of overwhelming force, and several countries all across the world were extremely on edge. The U.S. would no longer focus on testing comparable bombs after seeing the results of the Tsar Bomba. In 1963, the Societ Union signed a Treaty banning nuclear weapon tests in the air, sea, and on land.

Richard Douglas writes on firearms, defense and security issues. He is the founder and editor of Scopes Field, and a columnist at The National Interest, 1945, Daily Caller and other publications. This article is being republished due to reader interest.