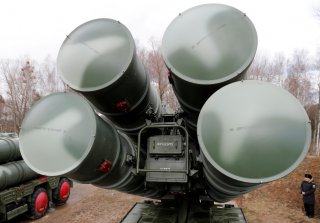 The Russian specialists who have serviced Turkey’s imported S-400 systems are returning home, reportedly as part of a technology transfer schedule previously agreed upon by Moscow and Ankara. Despite its routine nature, Moscow has expressed concern that the specialists’ return could be perceived as a sign that Turkey has reversed its controversial decision to import Russia’s flagship S-400 missile defense system. “All our specialists who were there are returning home according to schedule. They have completed all their work in training Turkish personnel and handing over all key matters. Therefore, it is completely wrong and incorrect to interpret this as some sort of expulsion or something else,” said Kremlin Spokesman Dmitry Peskov. According to the TASS report accompanying Peskov’s statement, the Kremlin spokesman was responding to “media reports that Ankara had allegedly expelled the Russian technicians in question under pressure from Washington.”

The Kremlin did not specify which media reports Peskov was addressing.

Western coverage of this topic has been relatively scant, with one of the more prominent entries being a May 31 Bloomberg article entitled “Turkey to Send Russian Missile Experts Home in Signal to Biden.”

“Turkey said it will send home Russian missile experts overseeing the S-400 air defense technology that has strained ties with the United States, addressing one of Washington’s concerns with the system while ruling out scrapping it altogether,” the article read. The Biden administration has previously called on Ankara to end the presence of Russian military experts on Turkish soil. Though Turkey has now done just that, the experts’ return can hardly be considered a policy victory for Washington if— as claimed by Moscow—they were never intended to permanently stay in Turkey to begin with.

But a narrow focus on the status of these Russian military experts distracts from the core issue: Turkish officials continue to insist that  Ankara has no intention of ever reversing its S-400 purchase. Bloomberg went on to cite Turkish foreign minister Mevlut Cavusoglu, who conveyed Ankara’s long-held position in clear terms: “The S-400s will be under our 100 percent control. We’ve sent many technicians for training. The Russian military experts won’t stay in Turkey,” he said. “It is not possible to accept calls from another country to “not use” them,” Cavusoglu added.

U.S.-Turkish relations are being roiled by Turkey’s 2017 decision to purchase S-400 systems from Russia, with no clear resolution in sight. Ankara has floated several compromises, including an arrangement for the S-400 systems to be stored indefinitely on non-Turkish, non-NATO territory. None of these proposals have gained any traction, as the Biden administration remains unwilling to budge from its position that Turkey cannot keep the S-400. Turkey, meanwhile, says that its ownership over the imported missile defense system is non-negotiable. “We have told them once again that Turkey has already bought the S-400s and that the issue is closed,” said Cavusoglu, following a meeting with U.S. Secretary of State Antony Blinken earlier this year.

One of the persistent wedge issues in the increasingly tense defense relationship between Washington and Ankara, the S-400 controversy looms over President Joe Biden’s upcoming meeting with Erdogan.