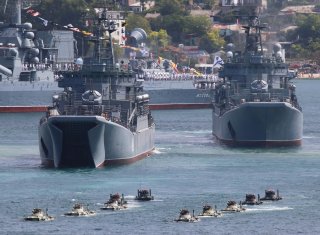 Here's What You Need to Remember: Nerpa limitations would be battery life, as well as how fast it could move through the water, both of which are unknown. Equipped with only an APS underwater rifle would also limit the Nerpa’s utility against anything other than enemy swimmers—or seals. No, not Navy SEALs, actual seals.

Conventional firearms are extremely ineffective underwater. Water exerts much more drag on an object than air, rapidly slowing down bullets underwater. Shooting at targets much more than about six feet away becomes next to impossible—and not because of inaccuracy. Bullets simply tumble downwards and gently sink. This neat video shows why and is worth the watch. So, how to remedy this “drag” of a situation? Underwater rifles.

The Soviet Union designed several great underwater rifles, so-called needleguns that shoot metal darts in lieu of bullets. Needlegun projectiles are somewhat similar to grandma’s knitting needles, long, thin, and pointy. They’re fired from a conventional brass cartridge filled with propellant however and can be fired much more accurately over longer ranges.

One Russian underwater rifle, the APS, shares several design features with the Soviet Union’s iconic AK-47 rifle, though the APS has a much longer magazine in order to accommodate the much longer bullets it fires. One of the drawbacks to shooting underwater is that accuracy and range decreases as depth increases due to water pressure. A later improvement to the APS, the ASM, shares many of the same characteristics as the APS, though it can also accept conventional ammunition and be used on land as well as underwater.

The Нерпа, or Nerpa, named after a type of seal endemic to Lake Baikal in Russia’s Siberian region, is essentially a small unmanned underwater vehicle that has an underwater rifle, likely an APS mated to it. If using a standard APS magazine, then the Nerpa has twenty-six shots available.

Designed by Rostec, a Russian state-owned conglomerate involved in defense and high technology, the Nerpa has a propeller at the rear as well as two internally carried thrusters for better depth control and maneuverability. The UUV’s nose also features a pronounced bulge that may hold a small sonar array, which would also allow the vehicle to “see” underwater.

Nerpa limitations would be battery life, as well as how fast it could move through the water, both of which are unknown. Equipped with only an APS underwater rifle would also limit the Nerpa’s utility against anything other than enemy swimmers—or seals. No, not Navy SEALs, actual seals.

But the Nerpa isn’t the only safety measure Russia has in place to guard submarine pens and ports. Aquatic mammals have also pulled security duty. Highly trained, intelligent, and fully aquatic, mammals like dolphins and seals are the German Shepherds of the sea and can make capable guard animals. One open-source intelligence sleuth found evidence of a Russian mammal guard program being used to protect Russia’s Tartus port on Syria’s Mediterranean coast.

A number of factors remain unknown about the Nerpa, particularly related to depth and endurance. But one thing is for certain—it is quite the odd-looking anti-diver port protector.

Caleb Larson is a defense writer for the National Interest. He holds a Master of Public Policy and covers U.S. and Russian security, European defense issues, and German politics and culture. This article first appeared last year and is being republished due to reader interest.