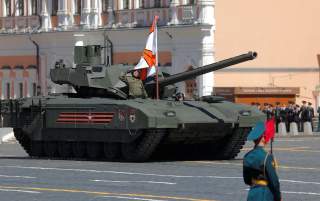 This week, Russia is hosting its biggest military exhibition—Army-2018. The exhibition is held at the recently established “Patriot” expo center not far from Moscow.  Dozens of nations, thousands of military technology samples and hundreds of thousands of visitors are expected to converge at the Patriot for the next several days. The event will feature actual weapon showcases, as well as numerous discussions and forums on current and future military technology innovation and fighting tactics.

Such events serve as a way for the Russian Ministry of Defense to advertise its current and prospective technologies. Last year, the Russian defense industry unveiled several interesting unmanned concepts. This week is no exception, as multiple Russian defense firms are showing their latest and greatest in unmanned military systems. One of the more interesting is the engineering “machine” concept by Kalashnikov company —dubbed “Igoryok.” It looks something out of Robocop but it has an operator cabin, walking legs, and two mechanical arms for gripping. Kalashnikov claims that a working model will be unveiled next year, and will be used “for engineering and combat tasks.”

“Burevestnik,” another Russian defense company, has announced that it will create an armored unmanned ground vehicle (UGV) based on the new “Dervatisya” self-propelled howitzer. The company stated that it has begun work on remote-control mechanism necessary to guide it in combat. Once built, this UGV will acquire the characteristic of its parent machine, the “Derivatsiya,” and is intended to combat drones, cruise missiles, air-to-surface missiles, tactical aviation aircraft, multiple rocket systems, and lightly armored ground-and-surface targets. This UGV concept would join a growing lineup of medium to heavy unmanned combat machines such as Uran-9, Vihr and the newly-announced "Storm" that is supposedly based on a T-72 tank chassis. The emphasis on heavy combat unmanned ground vehicles speaks volumes about Russia’s thinking on the future war, although Moscow has a long way to go until such designs are fully combat ready.

Army-2018 also serves as the platform for unveiling of unmanned surface and underwater vehicle designs. According to the announcement from the Sredne-Suzdal Shipbuilding Plant, it recently developed a new unmanned robotic boat (USV), and its field tests will be held before the end of the year. Currently, Russian Navy using “Inspektor” USV imported from France—a process that Moscow is seeking to change as it starts fielding domestic designs for its military forces. Additionally, Rostec state defense conglomerate announced its newest unmanned underwater vehicle (UUV) for intelligence, surveillance and reconnaissance (ISR) duties. The “Nerpa” design is “intended for protection and control of coastal waters, detection and destruction of small ships as well as saboteurs, and can be armed with explosives,” according to the company announcement. It is capable of diving to up to 180 feet and can operate for up to four hours. Other unmanned maritime entries were at the booth belonging to “Shelf” joint stock company, which presented a range of submersible unmanned designs.

Kalashnkov bureau also unveiled a system that links various combat technologies into a “single information space and distributes orders based on a neural network.” As demonstrated, this neural network is supposed to give target designation to the “Soratnik” combat unmanned ground vehicle, as well as to several machine-gun equipped combat modules that had “an intelligent target identification system.” Following target confirmation, the coordinates are transferred to the gun modules, combat UGV, assault boats and special forces, which should neutralize the target. Kalashnikov tried to unveil neural network-run combat modules last year as well, though there has been no follow up information until this week about such developments.

Throughout this week, various Russian defense companies will unveil additional concepts and prototypes, which will include unmanned designs and counter-drone concepts. Given Russia’s continued investment in such technology and Moscow’s claims that much of its military equipment rotated through Syria, this exhibition merits close attention.

Samuel Bendett is a researcher at the CNA Corporation and a Russia Studies Fellow at the American Foreign Policy Council. The views expressed here are his own.