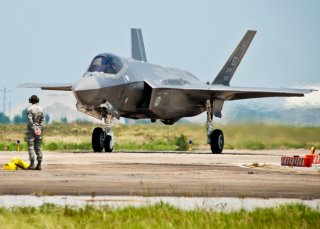 Here’s What You Need to Remember: “Operational analysis has indicated that the even-more-advanced Block 4 configuration is necessary to be effective in a conflict with China,” the report states. “However, challenges with maturing all of the Block 4 technologies has slid delivery of the full Block IV suite to at least 2029, and this is a significant factor in the Air Force's decision to slow F-35A procurement.”

The anticipated timeline for a new block upgrade to the F-35 fighter jet may be impacting the Air Force’s decision to slow the procurement process of the F-35A variant, according to a report on the future fighter jet force published by The Mitchell Institute for Aerospace Studies. The report, titled Future Fighter Force Our Nation Requires: Building a Bridge, says that delays in the delivery of Block IV to 2029 are potentially impacting the service’s delivery and acquisition plans for the aircraft.

“Block 4 is a suite of mostly classified hardware upgrades, technologies, and software drops that radically enhances F-35 combat effectiveness,” according to the report. “The F-35 was planned and produced around a concept of spiraling more capabilities into production aircraft.”

Many of the fighter jet’s combat capabilities are woven into incremental software upgrades that are designed to advance the technical abilities of the jet. For example, the Block 3F F-35 software upgrade increased the weapons delivery capacity of the JSF as well, giving it the ability to drop a Small Diameter Bomb, the five-hundred-pound Joint Direct Attack Munition and the AIM-9X Sidewinder missile.

The delays associated with Block IV run counter to the Air Force’s plan to quickly evolve the software upgrade process, as upgrades are accelerating and integrating on much faster timelines to leverage technological advances. Air Force officials have said that software modernization will no longer take place within predetermined windows separated by a year or more but happen on a continuous “as-ready” basis. This strategy complements the broader software upgrade plan and expedites modernization, security patches, artificial-intelligence-enabled functionality, condition-based maintenance and weapons upgrades.

Due to some of the more recent software upgrades, the F-35 fighter jet can fire the Sidewinder missile “off boresight” along with a growing range of other weapons. In the next few years, the Block IV upgrade will allow the stealth fighter jet to drop the Small Diameter Bomb Increment II, known as the Stormbreaker.

Given the importance of quickly adding new software to expand the ability of the jets to fight in modern wars, the report cites concerns related to the timeline for Block IV arrival. Block IV will be needed in any kind of confrontation with China, according to the report.