The U.S. Army is Getting Closer to Fielding New Robotic Combat Vehicles 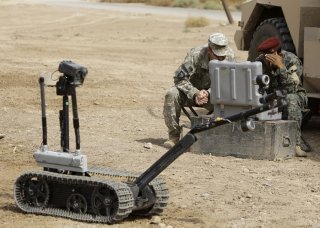 Here's What You Need to Know: There is an emphasis to combine new light and medium robotic combat vehicles into a company-size force to perform integrated operations.

Combat Commanders in Europe and the Pacific want ground robots to support their training, force deployments, war preparations and deterrence operations in response to increasing Russian and Chinese threats.

The reasons are likely multifaceted to include the pursuit of dispersed, multi-domain networking operations, manned-unmanned teaming and forward offensive attack operations. The Army’s Robotic Combat Vehicle effort, which has been going through extensive development and testing, is making rapid progress toward being ready to send new robots to war. For example, robots in Eastern Europe would test Russian defenses along border regions and network with aerial drones to pass along key details of force maneuvers to command and control. Due to the combat performance promise and tactical advantages associated with manned-unmanned teaming.

“We got a demand signal from other theaters, to have robots come and deploy to both the Pacific and into Europe for operations, exercises,” Maj. Gen. Ross Coffman, the director of the Next Generation Combat Vehicle Cross-Functional Team for Army Futures Command, told the National Interest in an interview.

The process is both ongoing and multi-faceted. The Army plans to test, assess and refine requirements for its emerging force of light, medium and heavy robotic combat vehicles (RCVs) to include operational evaluations, live-fire exercises, and various payload integrations.

There is a big emphasis to combine new light and medium RCVs into a company-size force to perform integrated operations able to draw upon the various attributes unique to each, Coffman explained.

“We’re going to take those four lights, those four mediums, and then the four surrogates that we built for last year’s robotic soldier experiment. And we’re going to form them into a company at Fort Hood, Texas,” Coffman said.

The rationale with this is to make adjustments to the robots and potentially refine requirements depending upon crucial soldier feedback which may determine which functions and attributes are best suited for operational integration onto the robots.

“That company of robots is going to perform tactical missions with soldiers from the first Cavalry division. And that will give us the information for Army senior leaders and make a decision of when we want to transition our RCV lights and mediums into a program of record,” Coffman said. “A year from now they're gonna go for their soldier experiment. This fall, we’re gonna get them in the hands of soldiers at one of our combat training centers.”

An essential part of the development of these robots is the exploration of a wide range of sensor applications or payloads which could be put on the robots, such as electro-optical/ infrared cameras, electronic warfare technologies, thermal sights, long-range targeting sensors and of course weapons.

“It’s a flat deck. From the deck down, it just looks like a tracked vehicle. Then you can put anything on it such as a Javelin or machine gun,” Coffman said.