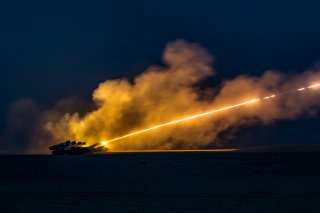 Here's What You Need to Remember: The PrSM is projected to reach initial operating capability by 2023. The missile will then receive a series of spiral upgrades in coming years, including an enhanced multimode Land-Based Anti-Ship Missile seeker, “increased lethality,” and, finally, a substantial range boost by several hundred kilometers.

The U.S. Army’s Precision Strike Missile (PrSM) has broken a new performance record as it inches closer to deployment readiness.

Lockheed Martin announced earlier this week that the PrSM achieved a range of four hundred kilometers in a test shot at the White Sands Missile Range in New Mexico. “We had impressive performance flying more than 400 kilometers in its longest range flown to date at the White Sands Missile Range,” Gaylia Campbell, announced Lockheed Martin’s vice president of precision fires and combat maneuver systems, as reported by Defense News. “PrSM was fired from a [High Mobility Artillery Rocket System (HIMARS)] launcher and it flew with the expected precision to the target area where it once again demonstrated a highly accurate and effective warhead event. Our test objectives included confirming the flight trajectory, range and accuracy from launch to impact as well as warhead lethality, HIMARS integration, and overall missile performance,” Campbell added. Lockheed published a brief video of the PrSM’s first flight test in April 2020. The PrSM will subsequently be tested at Vandenberg Air Base, California, in August, where it is expected to exceed a range of 499 kilometers.

The new missile has its roots in a 2016 three-way competition between Lockheed Martin, Boeing, and Raytheon to replace the MGM-140 Army Tactical Missile System (ATACMS) surface-to-surface missile with a faster, smaller, and longer-range successor. By March 2020, Lockheed was the only company left in the competition. The PrSM is being developed as a next-generation, long-range surface-to-surface missile system that, according to Lockheed, “will deliver enhanced capabilities to attack, neutralize, suppress and destroy targets using missile-delivered indirect fires out to 499+ kilometers.” Lockheed Martin added that the new missile “provides the Joint Force Commander with increased range, lethality, survivability and missile load out.”

The unusual “499+” figure is the maximum range allowed under Washington’s prior commitment to the Intermediate-Range Nuclear Forces Treaty (INF). That limitation has been lifted with the treaty’s dissolution in 2019, enabling the missile to fly at a greater range. The PrSM’s current projected range remains unclear, though prior Army estimates went as high as 550 kilometers; by comparison, the latest MGM-140 revision has a range of around 300 kilometers. The PrSM currently relies on GPS guidance, but the military could equip future iterations with less jammable solutions.

Army Gen. John M. Murray, Commanding General of Army Futures Command, told the National Interest in a prior interview that the PrSM is Washington’s “post-INF” solution for rockets,” intended to keep pace with great-power competitors and to hold their assets at risk in a corresponding manner. Though the full extent of the military’s deployment plans for the PrSM remains unknown, the missile is expected to see early use in an anti-ship capacity.

The PrSM is projected to reach initial operating capability by 2023. The missile will then receive a series of spiral upgrades in coming years, including an enhanced multimode Land-Based Anti-Ship Missile seeker, “increased lethality,” and, finally, a substantial range boost by several hundred kilometers.