U.S. B-52 Bombers Could Soon Be Laying Sea Mines 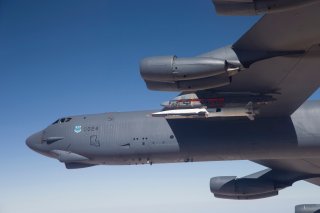 Here's What You Need to Remember: Mines remain an important part of the Navy’s arsenal as they serve a dual role as offensive/defense asymmetric weapon and for good reason have been described as “weapons that wait.” Since the end of World War II, it has been mines that have seriously damaged or sunk almost four times more Navy ships than all other means of attack combined.

Peter Suciu is a Michigan-based writer who has contributed to more than four dozen magazines, newspapers and websites. He is the author of several books on military headgear including A Gallery of Military Headdress, which is available on Amazon.com. This article first appeared in 2020.