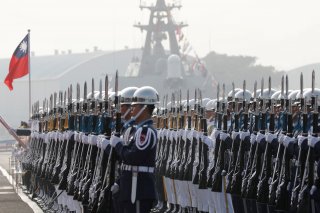 Here's What You Need To Remember: China claims that it has the resources to intercept America's recently-installed cruise missiles in Taiwan. We're not so sure.

The Global Times quotes a Chinese military expert as saying, “Lockdown via sea mines is an outdated tactic from World War II, and the PLA has long gained the capability to sweep sea mines and open green passages.”

The paper also cited experts claiming that China has a “wide selection of tools” to intercept attacking cruise missiles.

“These types of cruise missiles are only of high subsonic speed, and follow a relatively fixed flight trajectory,” a Chinese military expert is quoted as saying.

While many details regarding both Chinese and U.S. weapons systems are of course very much unknown, the claims made in the article raise certain questions casting doubt upon much of what was stated in the article.

Sea mines have, as the Chinese paper points out, been around since World War II or before, yet the article seems to miss the significance of more recent innovations. Modern Sea mines are now engineered with an entire sphere of new sensors, enabling various kinds of longer-range, more sensitive detonation technologies. Some are contact explosions, some are buried beneath the ocean floor and still others are engineered with sensors for “proximity” detonation, enabling a broader range of possibilities.

Furthermore, it is not at all clear that the Chinese military is equipped with any of the new mine-detection innovations now being developed by the United States. The U.S. Navy is now fast-tracking Unmanned Surface Vehicles equipped with newer kinds of sonar, ISR coordination and undersea mine-detection technologies.

The U.S. Navy also has mine-attacking drones built with new levels of autonomy and sensors better able to find and discriminate mines. As part of this, many of the newer U.S. countermine technologies have autonomous detonation technologies, meaning they can detect a mine before subsequently exploding it while on the move without needing human direction. Does China have any of these innovative systems?

The Chinese claim that vertical take-off attack planes can overcome mines also seems questionable, meaning air-attack, while quite significant, would of course not necessarily clear the way for a surface-driven amphibious attack. Ships, drones, and amphibious assault vehicles would still have to traverse through mine areas.

As for the Chinese claim that the cruise missiles Taiwan is acquiring do not pose a threat, there may also be questions or doubts. While the specific guidance systems of the cruise missiles acquired by Taiwan might not be fully known, there are now a wide range of U.S. innovations enabling a new generation of targeting technology.

Attacking cruise missiles can now maneuver in flight to hit moving targets in a previously unprecedented fashion. Existing Tomahawk missiles, for example, are engineered with advanced, drone-like targeting sensors enabling a “loiter ability” above target areas. Of even greater relevance, the Navy’s Maritime Tomahawk is known to be capable of “maneuvering” to hit moving targets at sea by utilizing new data links, high-throughput radio and sensor technology.

While the exact technical composition of the weapons being acquired by Taiwan may be somewhat unknown, there are existing and often-discussed technologies now in existence which, at very least, cast a shadow of doubt upon the assertions made in the Chinese paper.

Kris Osborn is Defense Editor for the National Interest. Osborn previously served at the Pentagon as a Highly Qualified Expert with the Office of the Assistant Secretary of the Army—Acquisition, Logistics & Technology. Osborn has also worked as an anchor and on-air military specialist at national TV networks. He has appeared as a guest military expert on Fox News, MSNBC, The Military Channel, and The History Channel. He also has a Masters Degree in Comparative Literature from Columbia University. This article first appeared several months ago.