The U.S.Navy's New Columbia-class Submarine Will Show The True Power Of Stealth 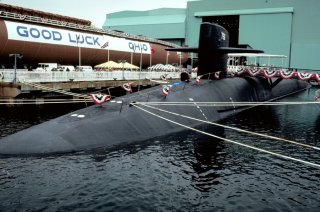 Here's What You Need To Remember: “Submarines are very difficult to find. They are not impossible to find. They have to be operated correctly like any stealth platform. But you derive that from force survivability. It is the combination of the number and location and the way you are operating the force is what gives you that very high confidence that that leg is going to survive,” Admiral Charles Richard, Commander of U.S. Strategic Command, told SeaPower Magazine.

Nuclear missile submarines exist to ensure total atomic annihilation in the event the United States is hit with a catastrophic first strike. They linger in obscure, out of the way and nearly impossible places to find beneath the surface of the ocean.

And now the U.S. Navy is building the quietest, stealthiest submarines ever to exist, complete with unknown quieting materials, an X-shaped stern and electric drive. They are armed with highly destructive, nuclear-armed Trident II D5 submarine-launched missiles.

Often talked about at the Pentagon’s number one acquisition priority, they are the new Columbia-class nuclear-armed ballistic missile submarines. They are already under construction and slated to emerge at the end of the decade.

They are the new generation of submarines to ultimately replace the existing Ohio-class submarines and sustain the undersea nuclear deterrent all the way into the 2080s.

The current plan calls for the Navy to build twelve of the new submarines, but that could change.

Citing the Commander of U.S. Strategic Command, an interesting essay in Seapower Magazine explains that there may be a need for more than twelve Columbia-class submarines, given the pace and magnitude of growing Chinese and Russian threats.

“Submarines are very difficult to find. They are not impossible to find. They have to be operated correctly like any stealth platform. But you derive that from force survivability. It is the combination of the number and location and the way you are operating the force is what gives you that very high confidence that that leg is going to survive,” Admiral Charles Richard, Commander of U.S. Strategic Command, told SeaPower Magazine.

While Richard did not explicitly say that the Pentagon was planning to build a larger number per se, he did use the phrase “at least 12,” and make the point that numbers of platforms may need to adjust in response to the threat.

“If you change the threat on me, then we have to come back and re-think what the right number is,” he told Seapower.

Increasing the number of Columbia platforms would introduce substantial and far-reaching tactical implications. The reason the Pentagon plans to build twelve Columbia’s to replace fourteen Ohio-class ballistic missiles submarines is because the Columbia’s are built with a “life-of-core” nuclear reactor and will not need to return for mid-life refueling. This massively extends deployment time and mission effectiveness as the submarines will not lose operational availability during refueling.

Adding several more, therefore, changes the equation dramatically as it enables the Navy to operate a larger number of submarines at various strategically vital locations around the globe at one time. This not only increases a strategic advantage but also builds in redundancy so that if one is found by an enemy, several others will be in position to attack.

While many of the technologies built into the Columbia are likely not available for security reasons, the boats do incorporate a number of cutting edge systems, some of which are adapted from the new Virginia-class attack submarines. These include the use of a fiber optic cable for periscope viewing so that humans viewing in a command and control capacity will not need to be directly under the top of the submarine.

They will also use a Fly-by-Wire computerized navigation system wherein depth and speed can be adjusted automatically without an operator needing to use hydraulic controls. Instead, operators can use more of a joystick. This kind of application also enabled the continued integration of artificial intelligence and computerized autonomy.

The very existence of the Columbia-class submarine rests upon an obvious, yet crucial paradox. Tremendous amounts of destructive power quietly patrols the ocean depths around the world, all as a way to stop war and “keep the peace.”