Uzi: Why This Legendary Submachine Gun Could Be Making a Comeback 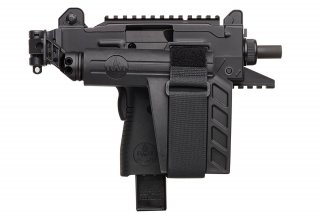 Key Point: The Uzi Pro submachine gun is exactly as advertised: a modernized Uzi, but an Uzi nonetheless.

Firearms manufacturer Israeli Weapon Industries (IWI) is best known as the creator of the Uzi, a compact submachine gun designed for urban and close-quarters use. Enshrined in popular culture through such classics as Scarface and used in over 90 countries since its introduction in the mid-1950’s, the Uzi remains one of the most recognized guns in the world. But the original Uzi saw a steep decline in the following decades-- especially with the proliferation of AK-pattern weapons in third and second-world conflicts-- and is now nearly extinct as a military service firearm.

Over 50 years later, IWI set out to design a modernized successor variant that retained the Uzi’s iconic frame whilst offering performance in line with “the technological standards of the 21st century”: the Uzi Pro submachine gun (SMG).

Did IWI succeed in resurrecting the Uzi brand? Here is how the Pro, introduced in 2012, stacks up against the original.

“It just works,” exclaimed a short promotional video in which an Uzi Pro was successfully fired after being buried in mud. This is a somewhat curious advertising angle to pursue, given that the original Uzi was never seen as having reliability issues-- nevertheless, IWI wants to stress that the Uzi Pro will perform even under the most extreme conditions.

Several key changes are evident in the Uzi Pro’s design; most notably, IWI offers an optional sidefolding, stabilizing arm brace for improved ergonomics. The charging handle has been moved from the top to the left side, allowing the integration of a full-length, non-removable picatinny rail. For those looking to mount a flashlight, another rail is attached beneath the barrel. The Pro retains the grip safety of its predecessor, adding two more: a thumb safety and firing pin block. Eschewing the caliber diversity of previous Uzi models, the Pro is only available in 9mm Parabellum. Partly to circumvent the ATF’s ban on open-bolt firearms, the Pro now sports a closed-bolt design.

As with the original, the Pro comes with a 25-round magazine; however, it also adds a 20-round option to traverse high-capacity magazine regulations. The Pro is also significantly lighter, clocking in at 3.66 pounds versus the 5.95 lbs of its predecessor. This weight reduction was partly achieved with the implementation of a redesigned polymer grip with a flared magazine, which also promises enhanced ergonomics.

And this is the extent of the differences between the Pro and the original Uzi. The former is lighter, more ergonomic, more durable with additional safety features, and accommodates a wide range of picatinny-mounted lights and optics. If taken with the optional brace and a red-dot sight, the Pro potentially offers marginally improved accuracy.

The Pro is exactly what IWI advertised it as: a modernized Uzi, but an Uzi nonetheless. The Pro does not, and was never meant to, transcend the inherent limitations that led the Uzi platform to be abandoned as a military service weapon in the first place. It could, however, succeed the original Uzi to fill a specific urban niche in law enforcement and private security contexts.