The V-22 Osprey Is the Aircraft that Keeps on Giving 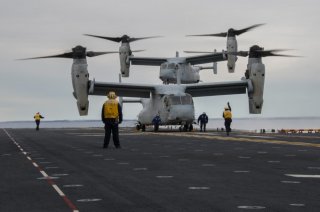 Here's What You Need To Remember: Adding weapons to the Osprey would naturally allow the aircraft to better defend itself should it come under attack from small arms fire, missiles or surface rockets while conducting transport missions; in addition, precision fire will enable the Osprey to support amphibious operations with suppressive or offensive fire as Marines approach enemy territory.

The 400th Bell-Boeing built Osprey was delivered to U.S. Air Force Special Operations Command to support a wide range of mission sets to include troop transport, resupply and long-range infiltration.

The Osprey has supported land and maritime combat and land war for many years since its arrival more than 10 years ago; its mission success has inspired the Pentagon to continually upgrade the aircraft for service as far as into the 2050s and beyond.

The longevity and expected service-life of the Osprey has, for many years, been supported by a wide range of sustainment and modernization efforts including aerial refueling and advanced digital networking. There is also the possibility of further arming the platform and the Navy has been working to engineer and deploy its own variant of the Osprey. The CMV-22B Navy variant, in development now for several years, is intended to replace the current role of the carrier-launched C-2 Greyhound aircraft.

The military services who operate the Osprey have, over the years, added a Digital Interoperability technology to network the aircraft, its crews and other air and ground nodes to transmit combat crucial real-time intelligence information.

Due to its tiltrotor configuration, the Osprey can hover in helicopter mode for close-in surveillance and vertical landings for things like delivering forces, equipment and supplies—all while being able to transition into airplane mode and hit fixed-wing aircraft speeds. This gives the aircraft an ability to travel up 450 nautical miles to and from a location on a single tank of fuel, Corps officials said.

The Pentagon concept with future Osprey variants is to build upon the lift, speed and versatility of the aircraft’s tiltrotor technology and give the platform more performance characteristics in the future. While few specifics were yet available, this will likely include improved sensors, mapping and digital connectivity, even greater speed and hover ability, and better cargo and payload capacity. Other upgrades will probably see next-generation avionics and new survivability systems such as defenses against incoming missiles and small arms fire.

The Osprey is, among other things, known for its ability to reach speeds more than 250 knots and achieve a much greater combat radius than conventional rotorcraft. Upgrades to the Osprey better facilitate an Osprey-centric tactic known as “Mounted Vertical Maneuver,” wherein the tiltrotor uses its airplane speeds, helicopter hover and maneuver technology to transport weapons such as mobile mortars and light vehicles, supplies and Marines behind enemy lines for a range of combat missions—including surprise attacks.

Over the years, the Naval Surface Warfare Center and various industry partners have explored the possibility of more fully arming the Osprey with new weapons, giving its fast expanding combat roles. At one point, various services were exploring requirements along those lines, however the status of such an initiative is, at the moment, unclear. At one point in recent years, industry experimented with firing 2.75 folding fin Hydra 70 laser guided rockets to support the aircraft’s mounted guns.

This article first appeared in June 2020 and is being reprinted for reader interest.