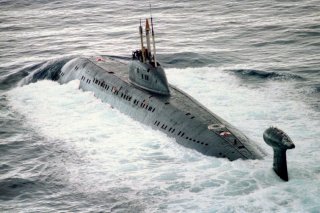 Here's what you need to remember: Starting over with a new class of submarine promised not only to close the stealth gap but to provide across-the-board improvements in numerous other aspects of the submarine’s performance.

Versatile, powerful, and relatively quiet, the Victor III-class is the culmination of over a decade’s worth of Soviet submarine engineering experience—and a fair bit of espionage to boot.

The Project 671 class of Soviet nuclear-powered attack submarines, better known by its North Atlantic Treaty Organization (NATO) reporting name Victor, posed an undisputed generational leap for Soviet anti-submarine warfare (ASW) capabilities, filling an important offensive and escort role in the Soviet Navy. The subsequent Victor II revision rounded out the submarine’s weapons loadout, introducing new missiles designed to target large surface ships. But, despite the best efforts of Soviet engineers, the Victor I- and Victor II-class submarines could not escape one glaring vulnerability: a vast Cold War-era acoustics gap with its NATO attack submarine counterparts. The Soviet military decided to cut the Victor II-class short, starting over with a new class that promised not only to close the stealth gap but to provide across-the-board improvements in numerous other aspects of the submarine’s performance.

Constructed at least in part with information collected by the Soviets from the infamous Walker spy ring, the Project 671RTM Shchuka (NATO reporting name Victor III) submarines were known in the U.S. Navy as the Walker-class. Building on the noise reduction efforts pursued in the Victor II project, the Victor III showed signs of greatly expanded rafting efforts to better insulate the noise generated by the submarine’s turbine mechanisms. The submarines were outfitted with specially designed shafts and ventilation systems to further reduce noise signatures, as well as onboard countermeasures against magnetic anomaly detectors. But the improvements did not stop with the first Victor III submarine, K-524, which was laid down in 1976. Minor performance tweaks were made from boat to boat, further reducing the noise level of the Victor III-class over the course of its service life. Though they almost certainly did not close the noise gap with the U.S. Navy’s formidable Los Angeles class submarines, the late Victor III submarines did manage to narrow it to a then-unprecedented degree.

Victor III was the successful culmination of a long and winding development path, serving for decades as the backbone of the Soviet Navy’s attack submarine force. As many as twenty-one Victor III-class submarines were built, making it the most numerous of the three Victor classes. As of the time of writing, all but two—the Northern Fleet’s K-138 Obninsk and K-448 Tambov—have been retired.

This is the final entry in a three-part series in the history and capabilities of the Victor-class submarines.

This article first appeared earlier this year and is being reprinted due to reader interest.