This Video Shows a B-2 Stealth Bomber Drop a 5,300-Pound Bunker-Buster Warhead 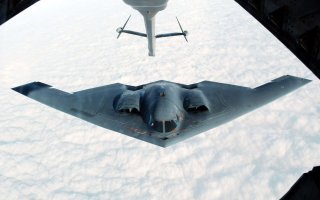 Here's What You Need to Know: While not getting any younger from its 1997 debut, this warplane is anything but a slouch in the heavy bomber stealth performance department.

In May 2019, the US Air Force posted a two-minute long video of the B-2 dropping GBU-57A/B “bunker buster” bombs from a past training event. The clip, shot with an unusually high video fidelity for a military exercise, shows a B-2 opening its internal weapons bay to drop two GBU-57 massive ordnance penetrator (MOP) bombs. One of the bombs drills into the earth beneath the designated area, marked with a red cone, before detonating in a powerful explosion with good effect on target (GEOT).