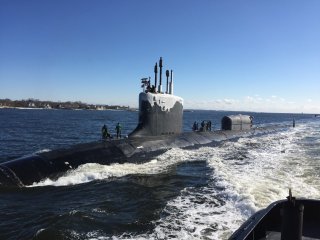 Here's What You Need to Remember: Virginia-class submarines are engineered with “Fly-by-Wire” capability which allows the ship to quietly linger in shallow waters without having to surface or have each small move controlled by a human operator. With this technology, a human operator will order depth and speed, allowing software to direct the movement of the planes and rudder to maintain course and depth.

Many in Congress are hoping the Pentagon receives enough funding to secure the acquisition of more Virginia-class attack submarines on a faster timetable to help offset an anticipated submarine shortage, best leverage the many technical advances contained in the submarine, and optimize the fast-growing execution of undersea reconnaissance missions.

The House Committee on Armed Services Subcommittee on Seapower and Projection Forces announced its proposals for the mark-up of the National Defense Authorization Act for Fiscal Year 2021; the subcommittee recommends the restoration of a second Virginia-class submarine and the required advanced procurement to maintain the two-per-year build rate, as reported by Seapower Magazine.

Land weapons, port activities, and other enemy movements in coastal or island areas are more difficult for deeper draft surface ships to access, often complicating surveillance missions – without giving away their position. Surface ships and the drones or aircraft they operate could, in a variety of operational environments, would be more “detectable” to enemy radar and sensors when compared to attack submarines. Given these and other variables, Virginia-class submarines are becoming increasingly critical to clandestine “intel” missions beneath the surface in high-risk areas.

Virginia-Class submarines are engineered with “Fly-by-Wire” capability which allows the ship to quietly linger in shallow waters without having to surface or have each small move controlled by a human operator. With this technology, a human operator will order depth and speed, allowing software to direct the movement of the planes and rudder to maintain course and depth. The ships can be driven primarily through software code and electronics, thus freeing up time and energy for an operator who does not need to manually control each small maneuver, Navy program managers have told the National Interest.

This technology, using upgradeable software and fast-growing AI applications, widens the mission envelope for the attack submarines by vastly expanding their ISR potential. Using real-time analytics and an instant ability to draw upon and organize vast databases of information and sensor input, computer algorithms can now perform a range of procedural functions historically performed by humans. This can increase the speed of maneuverability and an attack submarine's ability to quickly shift course, change speed or alter depth positioning when faced with attacks.

The U.S. Navy’s 2018 “Commander’s Intent for the United States Submarine Force,” writes - “We are uniquely capable of, and often best employed in, stealthy, clandestine and independent operations……. we exploit the advantages of undersea concealment which allow us to: Conduct undetected operations such as strategic deterrent patrols, intelligence collection, Special Operations Forces support, non-provocative transits, and repositioning,” the Navy strategy document writes.

This first appeared in June 2020 and is being republished due to reader interest.