Virginia-Class: The Submarine That Terrifies Russia and China 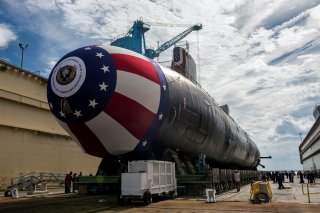 Here's What You Need to Know: In order to work around the Navy—the Navy—is not renaming the class, but “blocking” the tweaked variants. Smart.

According to the Congressional Research Service, the Virginia-class design “was developed to be less expensive and better optimized for post-Cold War submarine missions than the Seawolf-class design,” which was intended to be the United States’ heavy-weight with which to attack the Soviet Union underwater strongpoints. Only three Seawolfs were built.

A secondary benefit to the “incremental change” strategy is that the lessons learned that would presumably be incorporated into the Columbia-class design. The Columbia-class is a planned twelve-hull design that would be America’s most advanced nuclear-propelled design once they enter the water, likely in 2027.

Hooper explains that the downside of incorporating incremental changes is that it hampers new ideas: “the time-consuming and expensive bureaucratic requirements that face new programs may discourage innovation and incentivize the Navy to keep older platforms in service longer than is prudent.” Put bluntly, the Pentagon’s pathological fear of a “new start” may encourage the development of sub-optimal solutions to avoid testing and trial requirements inherent in a “new platform.”