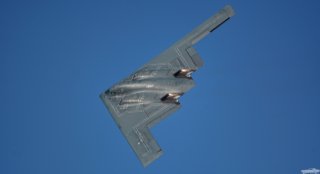 Here's What You Need To Remember: The U.S. Air Force's plans to modernize the B-2 platform over the coming decades while retaining the core performance features that have made it America’s staple heavy nuclear bomber.

The B-2 Spirit is the most advanced strategic bomber in the U.S. Air Force roster, occupying a vital role in the American nuclear triad for its blend of deep penetration and heavy ordnance delivery capabilities.

There has been no shortage of B-2 footage over the past several decades, extensively capturing its takeoff and maintenance routines as well as a wide range of aerial shots. However, there has been a curious dearth of B-2 weapons exercise clips—until now.

The U.S. Air Force posted a two-minute long video of the B-2 dropping GBU-57A/B “bunker buster” bombs from a past training event. The clip, shot with an unusually high video fidelity for a military exercise, shows a B-2 opening its internal weapons bay to drop two GBU-57 massive ordnance penetrator (MOP) bombs. One of the bombs drills into the earth beneath the designated area, marked with a red cone, before detonating in a powerful explosion with good effect on target (GEOT).