We Have the Video: Watch the Largest Nuclear Explosion of All Time 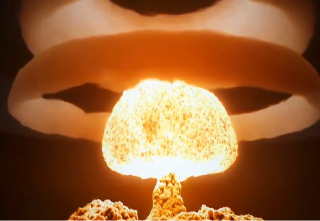 Here's What You Need to Remember: Still, the Tsar Bomba did achieve one strategic objective for Moscow: shocking and surprising the North Atlantic Treaty Organization—and helped spur the 1963 Partial Nuclear Test Ban Treaty, a moratorium on nuclear tests underwater, in space, and in the atmosphere.