What Can Russia's MiG-31 Do in the Stratosphere? 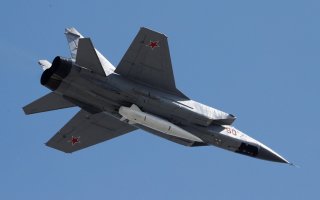 Here's What You Need to Remember: But while the strategic threat capability of the MiG-31 has been well covered over the past year, this recent exercise is a reminder of the MiG-31’s tactical utility as an interceptor. The 31BM retains the DNA of its distant, Soviet MiG-25 predecessor in its ability to effectively engage fast, high-flying surveillance planes like the SR-71 Blackbird.

Mark Episkopos is a frequent contributor to The National Interest and serves as a research assistant at the Center for the National Interest. Mark is also a Ph.D. student in History at American University. This article first appeared in 2019 and is reprinted here due to reader interest.