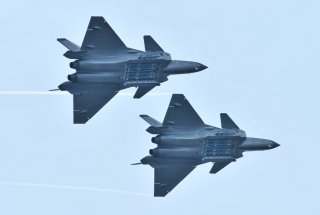 Despite the awesome maneuvers enabled by vector-thrust engines, they are far from being automatically included in modern fighters. This is because they significantly add to weight, cost, and difficulty in minimizing radar cross-section (RCS). Moreover, when vector-thrust engines are over-used in combat, they can bleed off energy rapidly, leaving the aircraft sluggish and vulnerable to enemy fighters (as occurred in one exercise in Nevada pitting U.S. F-15s against Indian Air Force Flankers). For this reason, few Western fighters incorporate vector-thrust technology, the F-22 being a notable exception. China’s interest in thrust-vectoring again suggests it sees relevance in agility.

The J-20’s short-range capabilities naturally lead to the question—what exactly happens when two stealth fighters clash? If their stealth qualities are robust, both aircraft may only be able to detect each other within 50 miles or less—at which point air combat maneuvers could prove important. U.S. stealth aircraft have become one of the chief military threats to China, so it seems reasonable to assume the J-20 would be designed to have a fighting chance against them.

But as the extent and type of the radar-absorbent materials used affect RCS, visual analysis alone cannot determine how stealthy an aircraft is. This has not dissuaded the U.S. Marine Corps from building a full-scale mock-up of a J-20 in Georgia for study and training purposes. The Indian Air Force has boasted its Su-30 Flankers have tracked J-20s on radar, but as stealth fighters often employ emitters called “Luneburg Lens” to enlarge their RCS on routine flights, and thus conceal their true capabilities, it’s difficult to infer much from this either.