What the New Marine Corps Philosophy Tells Us About Its Capabilities 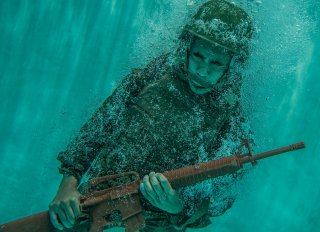 Here's What You Need To Remember: Taken by themselves, concepts of maneuver and precision firepower are both critical and expected to a large degree, yet a deliberate effort to synergize these kinds of approaches with information warfare, data analysis, and rapid sensor-to-shooter targeting time introduces new warfare paradigms.

As key tenets or points of emphasis in a newly released U.S. Marine Corps philosophy paper, yet the text does introduce some uniquely modern variables and applications which represent interesting steps forward and adaptations to a fast-evolving modern threat environment.

“We operate in the spirit of, and are guided by, the tenets of maneuver warfare. These tenets describe how we fight. We recognize that war is ultimately a violent clash of human wills with an enduring nature characterized by friction, uncertainty, disorder, and complexity,” the Marine Corps philosophy paper explains.

The document, entitled Marine Corps Vision and Strategy, 2025, combines these classic combat approaches with uniquely modern techniques and tactics and, perhaps of even greatest significance, integrates concepts of highly lethal forms of maneuver warfare with new generations of technologies.

“We seek victory by shattering the cohesion and will of the enemy, not just through sheer physical attrition of his means to resist. We combine maneuver with firepower to produce a violent and lethal outcome for the adversary. We seek to concentrate our strength against enemy weakness, exploiting his critical vulnerabilities while minimizing and protecting our own,”  the strategy writes.

Taken by themselves, concepts of maneuver and precision firepower are both critical and expected to a large degree, yet a deliberate effort to synergize these kinds of approaches with information warfare, data analysis, and rapid sensor-to-shooter targeting time introduces new warfare paradigms.

Maneuvering into attack position, it would seem clear, might be entirely different should targeting and surveillance specifics be arriving in seconds from various nodes across a “meshed” or interconnected data network. Faster, more precise firepower, enabled by sensor gathered, distilled, and organized pools of otherwise disparate sources of incoming data can mean finding, attacking, and even destroying an enemy more quickly. These variables, therefore, when viewed as an integrated or networked “whole” can merge classic Corps’ warfare concepts such as maneuver warfare and the use of heavy, yet precise firepower, combine to introduce unprecedented combat dynamics.

“We believe our decision cycle is faster than the enemy’s, allowing us to exploit the advantages of speed, focus, tempo, shock, and surprise. We believe that the human dimension of war is the most critical element, and that boldness, creativity, intelligence, and the warrior spirit are prime attributes. This philosophy applies across the full range of military operations,” the philosophy says.