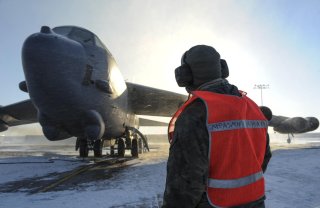 Here's What You Need to Remember: The B-52H bomber carrying a prototype ARRW boost vehicle was unable to complete its launch sequence and subsequently returned to Edwards Air Force Base in California. It remains to be seen exactly how this string of high-profile failures will affect the ARRW’s testing and delivery timeline, with the system already lagging months behind its flight schedule.

A second flight test of a prototype of the U.S. Air Force’s hypersonic AGM-183A Air-Launched Rapid Response Weapon (ARRW) has had some trouble.

The Air Force provided a brief statement on the outcome of the July 28 flight test. “Objectives for the test included demonstrating the safe release of the booster test vehicle from the B-52H and assessing booster performance. An Edwards AFB B-52 released the ARRW test missile, dubbed Booster Test Vehicle 1b or BTV-1b, over Point Mugu Sea Range,” read the statement.

The statement clarified that the initial parts of the test were carried out successfully: “The missile cleanly separated from the aircraft and successfully demonstrated the full release sequence including GPS acquisition, umbilical disconnect and power transfer from the aircraft to the missile. The missile also demonstrated fin operation and de-confliction maneuvers which ensures a safe operation for the aircrew.”

But the statement noted that the rocket booster failed to ignite upon separation from the B-52 Stratofortress carrying the missile, quickly adding that “the ARRW team continues to progress through the rapid prototyping effort with a steadfast commitment to the well-being of Airmen and equipment, striking a balance between prudent risk and rapid advancement of the program.” Citing  Brig. Gen. Heath Collins, the Air Force Program Executive Officer for Weapons, the statement insisted that “developing first-of-its-kind missiles is difficult business.” Collins argued that “this is a critical capability for our Air Force and we have the very best team working to figure out what happened, fix it and move out to deliver ARRW to our warfighters as quickly as possible.” The Air Force did not provide additional details on the circumstances behind the ignition failure.

Conceived as part of a $480 contract between the Air Force and Lockheed Martin, ARRW is an air-launched hypersonic weapon with a prospective operational range of approximately 1000 kilometers and reported maximum flight speed of over Mach 7. The weapon employs a boost-glide system, using a booster rocket to propel itself high enough into the atmosphere. The payload then separates and glides toward its target at hypersonic velocity. A senior Air Force official said that a B-52 bomber will be able to carry as many as four ARRW’s. The hypersonic missile system will also be compatible with the upcoming B-21 Raider stealth bomber, though the full extent of the fifth-generation bomber’s payload configuration remains unclear. ARRW, which is poised to become the U.S. military’s first hypersonic weapon system, is a major part of Washington’s ongoing efforts to catch up with Russia and China in the realm of hypersonic technology.

This recent failure comes shortly on the heels of an abortive ARRW booster test in April 2021. The B-52H bomber carrying a prototype ARRW boost vehicle was unable to complete its launch sequence and subsequently returned to Edwards Air Force Base in California. It remains to be seen exactly how this string of high-profile failures will affect the ARRW’s testing and delivery timeline, with the system already lagging months behind its flight schedule. The Air Force still expects the upcoming weapon to reach early initial operating capability by 2022.