When This U.S. Destroyer Entered the Black Sea Russia Was Not Pleased 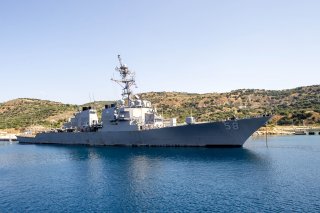 Here's What You Need to Remember: In a TV segment on Moscow’s spiraling military tensions with the West, Russian news anchor Dmitry Kiselyov expressed alarm over Laboon’s trip.

“The men and women serving aboard USS Laboon look forward to sailing in the wake of the ships before us and continuing our nation’s commitment to security and stability in the Black Sea,” Cmdr. Chuck Spivey, commanding officer of Laboon, said in a press statement. “The Black Sea is a vital waterway and we are ready to work with our NATO Allies and partners in the region to enhance our collective readiness and to exchange best practices in regional maritime security.”  The eighth Arleigh Burke-class destroyer, Laboon was commissioned in 1995.

Without explicitly referencing the ongoing tensions between NATO and Russia in the region, the statement went on to describe the Black Sea as a “critical waterway for maritime commerce and stability throughout Europe,” adding that “combined operations in the Black Sea will strengthen interoperability between NATO partners and allies, including Turkey, Ukraine, Georgia, Bulgaria and Romania.”

The Kremlin reacted swiftly to the U.S. Navy’s latest Black Sea patrol, with Russia’s National Defense Control Center announcing on June 11 that “the [Russian Navy's] Black Sea Fleet’s forces and capabilities,” began tracking the Laboon upon its entry into the Black Sea.

In a TV segment on Moscow’s spiraling military tensions with the West, Russian news anchor Dmitry Kiselyov expressed alarm over Laboon’s trip. “Romania and Poland are one issue,” he said, “but another is when American destroyers with cruise missiles on board encroach on the Black Sea. Are we pleased with that? Just yesterday, on Saturday, the American destroyer Laboon entered the Black Sea with guided missile weapons, Tomahawk and Harpoon cruise missiles.” Kiselyov asserted that Laboon’s routine patrol is the latest in a long line of U.S. military provocations in the region. “In January, the American destroyers Porter and Donald Cook were spotted in the Black Sea. In March, the destroyer Tom Hudner and cruiser Monterey. And in May, the Coast Guard frigate Hamilton arrived in [Ukraine’s] port of Odessa.”

Kiselyov echoed the Kremlin’s longstanding concern that, despite not being a NATO member, Ukraine is giving NATO forces military access to its Black Sea shoreline as a means of pressuring Russia.

Laboon’s Black Sea trip comes on the eve of the June 16 summit between President Joe Biden and Russian president Vladimir Putin in Geneva. That context is not lost on Russian observers: “The American destroyer ‘Laboon’ entered the Black Sea three days prior to the meeting in Geneva. Unmistakably, to morally support Biden ahead of the negotiations,” wrote Russian Senator Aleksey Pushkov. “This is not coincidental,” Pushkov added. “It is an additional means of making it clear to Moscow that Biden has prepared a ‘tough signal’ for Putin.”