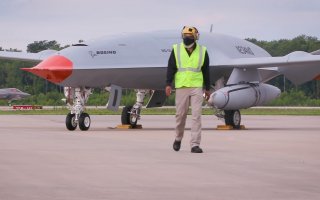 Here's What You Need to Know: The Stingray’s ISR-turned-tanker role is going full steam ahead.

A recent Boeing MQ-25A Stingray flight test was a success, according to the company, and demonstrated that the UAV can fulfill its intended role as an aerial tanker and extend the reach of carrier air wings. The flight marked the first time that the MQ-25 flew with an aerial refueling store, essentially a pod used to store and transfer aviation fuel.

“To see T1 [Stingray prototype] fly with the hardware and software that makes MQ-25 an aerial refueler this early in the program is a visible reminder of the capability we’re bringing to the carrier deck,” explained Dave Bujold, the MQ-25A Stingray program director in a statement. “We’re ensuring the ARS and the software operating it will be ready to help MQ-25 extend the range of the carrier air wing.”

The flight, which took place at company test site in near St. Louis, Missouri, lasted about two and a half hours and can be seen here.

The MQ-25 is intended to take over the role of aerial refueling for the Navy, a role currently filled by the Navy’s F/A-18 Super Hornets-turned tankers. Ultimately the Navy would like to procure seventy or more MQ-25s, and by having a dedicated tanker, allow F/A-18s to perform their carrier strike role as originally intended. Previous Navy information estimated that 20 to 30 percent of F/A-18 Super Hornet sorties were tanking flights, causing the airframes to rapidly rack up flight hours.

Although Boeing’s MQ-25 appears to have a traditional wing design and is not intended to be a stealthy platform, it could have a reduced radar cross section thanks to its apparently stealthily-contoured fuselage. And though it is now touted by both Boeing and the Navy as a tanker, it wasn’t originally intended to be an aerial tanker.

Boeing’s UAV actually began life as a dedicated information, surveillance and reconnaissance (ISR) platform that would have taken off from carrier flattops while the manned air wing wasn’t in the air. The shift from ISR to tanking means that the MQ-25 will now be flying alongside with Navy air wings, rather than by themselves.

As a tanker, the MQ-25 will use a hose and drogue refueling system, though that has yet to be tested during flight. “Future flights will continue to test the aerodynamics of the aircraft and the ARS at various points of the flight envelope,” Boeing stated. Future flights will include “progressing to extension and retraction of the hose and drogue used for refueling.”

Speaking to USNI News, a Navy official explained the Stingray’s shift, stating that the Navy is “probably going to drop some of the high-end specs and try to grow the class and increase the survivability [later],” with a focus now on “more refueling, a little bit of ISR, weapons later and focus on its ability to be the flying truck.”

Though the Stingray’s ISR-turned-tanker role is going full steam ahead, it remains to be seen if the single-engine platform will have both the payload and the range necessary to provide adequate refueling services. Keep an eye out for more Stingray updates.