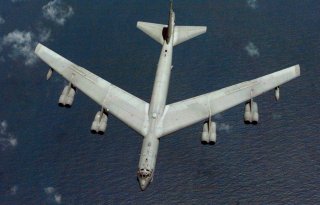 Here's What You Need to Know: Upgrades of the B-52 have been underway for many years now, based upon the interesting premise that, despite decades of service, B-52 airframes are still viable and holding up well.

When the B-52 burst onto the scene as a large platform bomber in the mid-1950s, few developers might have envisioned what is happening now. The classic bomber endures to fight another day, or decades one might say, because the Air Force’s 2022 budget request includes hundreds of millions for a massive B-52 upgrade and overhaul.

Could the bomber, known for carpet bombing in Vietnam, actually fly for 100 years? The airplane is approaching seventy years of operational service now, and the scope and technological sophistication of the ongoing upgrades may well sustain the platform for several more decades.

“$233 million is added to the B-52 budget for the most comprehensive modernization in its history, including new engines, new radar and communications systems,” Major General James Peccia, the Air Force Deputy Assistant Secretary for Budget, told reporters according to a Pentagon transcript.

How could this be possible? Upgrades of the B-52 have been underway for many years now, based upon the interesting premise that, despite decades of service, B-52 airframes are still viable and holding up well. Certainly, there may be structural reinforcements or added components and materials, yet the fuselage of the bomber, developers have explained, remains structurally quite sound.

Beyond that general baseline, virtually all other aspects of the B-52 are becoming entirely new, a set of technological additions and adaptations which succeed in basically engineering the bomber as a new aircraft.  Of course, the aircraft has new avionics, digital moving map displays, and a new generation of electronics. Yet other kinds of adaptations may account for the largest margin of difference. A complete re-engining of the aircraft is perhaps among the most recent upgrades, a change likely to not only massively extend service life but also greatly enhance performance in areas such as thrust, vectoring, and fuel efficiency.

Along with an entirely new radar system, the B-52 is integrating new communications and networking technologies, which include a rapid, retargeting low-frequency radio replacement to support nuclear weapons communications. Not only that, but perhaps of greatest significance, the datalink radio communications technology enables flight crews to receive intelligence updates and real-time targeting adjustments in flight, removing the need for attack crews to rely purely on pre-mission intelligence data.

The bomber has also in recent years been receiving a newly configured Internal Weapons Bay Upgrade (IWBU) enabling the aircraft to internally carry more Joint Direct Attack Munitions (JDAMS), Joint Air-to-Surface Standoff Missiles (JASSM), and a weapon called Miniature Air Launched Decoy, or MALD-J jammer variant. The emerging IWBU, which relies upon a digital interface and a rotary launcher to increase weapons payload, allows the B-52s to carry up to eight of the newest “J-Series” bombs.

In part due to these adaptations, the B-52 will become much more lethal with the addition of several yet-to-exist weapons such as the now-in-development nuclear-capable Long-Range Standoff Missile. Perhaps of greatest significance when it comes to weaponry, the Air Force plans to fire hypersonic weapons from the B-52. Earlier this year, the Air Force completed a simulated shot at a target 600 nautical miles away with an AGM-183 Air-Launched Rapid Response Weapon, a process through which the B-52 received target data from sensors 1,000 miles away at Joint Base Elmendorf-Richardson, Alaska, according to an Air Force report.

On the tactical side, it would seem almost obvious that an upgraded B-52 could operate as a drone-controlling “Mothership” able to launch and recover attack and surveillance drones, or possibly even function as a high-tech weapons truck or arsenal plane.