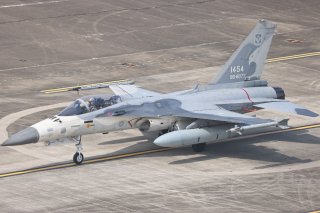 Here's What You Need to Remember: China’s military and foreign policy apparatus has been increasingly less demure about Beijing’s territorial claim on Taiwan. Chinese leader Deng Xiaoping famously proclaimed that the People’s Republic of China can wait one hundred years to reunify with Taiwan if necessary.

Taiwanese officials stated several weeks back that four J-16 and four J-10 multirole fighter jets, a Y-8 anti-submarine aircraft, and a KJ-500 early warning and control plane entered Taiwan's air defense identification zone (ADIZ). The Y-8 reportedly flew through the Bashi Channel connecting the Pacific to the South China Sea, while the others traveled in airspace southwest of Taiwan.

Taiwan scrambled planes to warn the Chinese aircraft away, according to the defense ministry. This incident is the latest in a procession of increasingly ambitious Chinese incursions. In late March, Taiwan reported the largest ever Chinese foray into its ADIZ—the defense ministry identified as many as twenty Chinese aircraft, including four nuclear-capable H-6K bombers and ten J-16 fighter jets. A “person familiar with Taiwan’s security planning” told Reuters that the flights were part of an exercise to “simulate an operation” against U.S. warships sailing through the Bashi channel.

Other experts have identified a more alarming military context, noting that the Chinese aircraft appeared to be practicing a wide bomber encirclement of Taiwan. In the event of a major conventional conflict, this maneuver could be part of a larger effort to suppress Taiwan’s air and coastal defenses as a prelude to a possible Chinese invasion of the island.