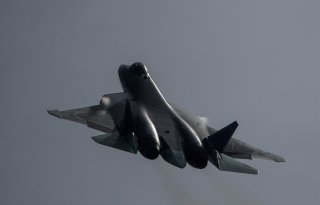 Here's What You Need to Know: The Russian strategy is to establish the Su-57 as a financially solvent platform that will incrementally phase out older aircraft to become Russia’s staple air superiority fighter over the coming decades.

Having formally cleared the Su-57 for export, Russia is poised to pitch their fifth-generation fighter to China.

At first blush, it does seem somewhat premature for Rosoboronexport to push the Su-57 into export markets so early into its production cycle. However, this approach is not without its benefits. First, an early, high-profile contract with an industry giant like Beijing would have positive spillover effects in generating market interest from other importers. China’s prospective purchase is already making waves throughout Indian defense commentary, though whether or not it will warm New Delhi to the Su-57 remains to be seen. By the same token, it would reassert the health and continued viability of the burgeoning Sino-Russian security relationship.