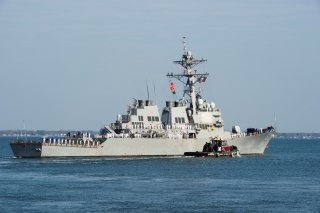 Here’s What You Need to Remember: The Naval Strike Missile is difficult to detect, extremely agile, and hard to shoot down—and if a conflict in the Pacific were to erupt, the NSM would play a crucial role for the United States Navy and Marine Corps as their anti-ship weapon of choice.

The Naval Strike Missile is hard to defend against — and the Chinese Navy has noticed.

Much ink has been spilled about the People’s Liberation Army Navy, the Chinese military’s naval branch, and the significant modernization they've made in recent years. In addition to commanding the world’s largest navy, the PLAN has also made several significant advances aside from just vessel numbers, including a new, potentially stealthy submarine and increasingly capable, domestically-built aircraft carriers.

But despite these qualitative and quantitative advances, the PLAN has its own qualms about the United States Navy, long the world’s premier naval force. One of the Chinese Navy’s biggest concerns? The United States Navy's potent Naval Strike Missile.

The Norwegian-designed Naval Strike Missile (NSM) is a formidable weapon. Flying at high-subsonic speed, the missile can engage targets both on land and at sea. It’s also hard to shoot down: the missile can evade observation by skimming over the ocean surface below radar detection altitude or by maneuvering around terrain features when flying over land. Moreover, the NSM initiates random flight maneuvers during its terminal flight phase that help the missile evade anti-missile defenses.

In addition, the NSM is believed to be significantly harder to detect than other comparable anti-ship missiles thanks to the use of advanced composite materials in the missile body and a stealthily contoured nose cone. Paired with a long, 115-plus mile range, the NSM significantly bolsters the United States Navy’s firepower.

The People’s Liberation Army Navy has scrutinized the Naval Strike Missile’s exceptional capabilities—and the PLAN doesn’t like what it sees.

In a recent research paper, the Marine Design & Research Institute of China, the Chinese shipbuilding industry’s foremost research and development body, singled out the U.S. Navy’s Littoral Combat Ship as a significant threat to the PLAN and in particular when armed with the Naval Strike Missile.

“Modular weapons [like the NSM] can reduce ship construction costs while weapons manufactured with the same interface standard can be easily installed on ships that meet this standard,” the paper, first reported on by USNI News, explained. “This is extremely conducive to boosting the ship’s overall capabilities, while ease of maintenance and ability for rapid retrofitting are greatly enhanced.”

By comparison, one of the U.S. Navy’s most common ships, the Arleigh Burke-class guided-missile destroyer, is typically monitored by just a single PLAN vessel while on naval exercises, underscoring the level of Chinese Navy concern in the Naval Strike Missile.

Though not explicitly mentioned in the Chinese research paper but also worthy of note is the United States Marine Corps' experimental Naval Strike Missile deployment, not at sea but on land.

By Air, Land, and Sea

The United States Marine Corps is in the midst of the most significant restructuring in its nearly 225-year history. Pivoting away from the kinds of long, grinding land campaigns that defined American involvement in the Middle East, the Corps is instead regrouping and retooling for a future combat scenario that would see them face off against a peer rival in the western Pacific: China.

Rather than counterinsurgency operations, the Marine Corps would be tasked with surveilling the vast Pacific Ocean and conducting search and destroy-type missions against PLAN vessels.

The strategy hearkens back to the Corps’ World War II-era island-hopping campaign that saw tens of thousands of Marines assault entrenched Japanese forces throughout the Pacific. However, this time, the Corps would rely not on massive amphibious island assaults but rather small groups of highly trained, highly autonomous Marines flitting from island to island armed with Naval Strike Missiles.

In Marine Corps hands, the NSM has paired well with an entirely different platform: the Joint Light Tactical Vehicle (JLTV), the Army and Marine Corps Humvee-replacement. In the future, remotely-controlled JLTVs, extensively modified to fire a pair of containerized NSMs, could carry out guard duty. The Corps envisions JLTVs stationed on remote specks of land throughout the Pacific, lying in wait for enemy surface ships, denying them the use of land and impeding moment in the surrounding waters.

The Marine Corps recently validated the JLTV-NSM mating through a live-fire event that sank a decommissioned target ship. Senior Marine leadership said the new capability gives the Corps a "transformative anti-ship capability" that did not previously exist.

The test also demonstrated that NSM-equipped JLTVs could conduct rapid roll-on, roll-off deployments in remote, austere locations, much like on the kinds of islands that dot the Pacific.

Currently, Naval Strike Missiles arm the U.S. Navy’s Littoral Combat Ships and the Marine Corps’ modified JLTV prototypes. In the future, however, the missile’s compatibility with other platforms is on track to expand. For example, the Navy’s still-in-development Constellation-class of frigates are likely to receive NSMs, which, if accepted, would form one of the class’ primarily anti-ship weapons.

A similar, air-launched variant of the NSM is also in development. In addition, though the modified missile has thus far been validated only on the F-16 Falcon fighter, the Navy has expressed a desire to arm their F-35 stealth fighters with the missile. If realized, the Navy could bring a formidable anti-ship capability to bear from air, land, and sea, all via essentially the same munition.

The People’s Liberation Army Navy is right to take note of the Naval Strike Missile. It is difficult to detect, extremely agile, and hard to shoot down—and if a conflict in the Pacific were to erupt, the NSM would play a crucial role for the United States Navy and Marine Corps as their anti-ship weapon of choice.