Why Did Militaries Stop Using Flamethrowers? 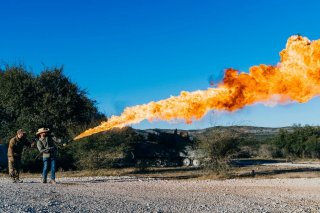 Here’s What You Need to Remember: “Fire is popularly and quite logically held as one of the worse ways to die,” McNab writes. “It is not quick, the victim taking long seconds and even minutes to succumb, as flesh, nerve-muscle and eventually organs are charred to destruction. Those who have observed such deaths give chilling accounts of the animal-like howls of the dying.”

And McNab’s slim volume, the latest in a long series of weapons monographs from Osprey Publishing, eloquently conveys the flamethrower’s awfulness, plumbs its disturbing implications, and celebrates its slow demise. All in evocative prose.

“Fire is popularly and quite logically held as one of the worse ways to die,” McNab writes. “It is not quick, the victim taking long seconds and even minutes to succumb, as flesh, nerve-muscle and eventually organs are charred to destruction. Those who have observed such deaths give chilling accounts of the animal-like howls of the dying.”

Through much bloody trial and error, armies refined their use of flame weapons. They learned to use highly viscous fuel mix in order to project a more concentrated stream of flames over greater distance — and to avoid the awful fate that befell one French fire regiment in June 1916.