Why Does China Think American Military Planes Have Been Spying on Them? 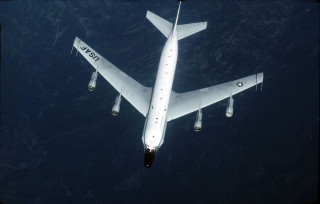 Here's What You Need To Remember: In August, Beijing issued a stern protest after a U-2 Dragon Lady reconnaissance aircraft had flown over a so-called “no-fly zone” during a Chinese live-fire military drill in the Bohai Sea, the northwestern and innermost extension of the Yellow Sea.

Over the past month, Beijing has accused the United States of sending military reconnaissance aircraft or “spy planes” that were “disguised” as civilian airliners to conduct intelligence-gathering missions in the East and South China Seas. Security officials within the Chinese government have claimed that the United States has carried out at least 100 such operations this year and that the U.S. Air Force’s RC-135 reconnaissance aircraft had conducted operations where the aircraft changed the identification codes to those assigned to Malaysian civilian aircraft.

The Chinese officials said this occurred while the military aircraft were circling international airspace between Hainan and the Paracel Islands.

The U.S. Air Force has denied that such spycraft in the sky had occurred. General Kenneth Wilsbach, head of Pacific Air Forces, said that the Air Force did not “spoof” the transponder signals of civilian aircraft and said all reconnaissance flights followed international rules.

“I know we follow the rules for international airspace, and we were following the rules that day,” Wilsbach noted when speaking to reporters during last month’s Air Force Association virtual Air, Space & Cyber conference, according to multiple reports including from AsiaTimes.com.

However, maritime policy expert Mark J. Valencia, who was quoted in the Express newspaper, said that the U.S. Air Force’s Boeing RC-135W and E-8C intelligence collection aircraft have frames that are similar to the Boeing 707-200 civilian airliner, and that the military planes do sometimes follow commercial routes.

“Their identification code is what helps to distinguish them on remote sensors,” wrote Valencia. “When China spots a spy plane, its military assets probably go silent. But with a ‘false flag’, the spy plane may deceive them into continuing activity and communications can be monitored. Under international norms, civilian aircraft should not be shot. The US may be betting on this, ironically taking advantage of China’s adherence to international norms.”

Increased Eyes in the Skies

According to online reports, China has claimed that at least sixty United States military aircraft had conducted close-up reconnaissance flights near China in September, and that the U.S. is preparing for even more long-distance missions over the region in the coming months.

This is according to a new report from the Chinese government-backed think tank, South China Sea Strategic Situation Probing Initiative (SCSPI), which was released earlier this week according to a story that ran in the English language South China Morning Post. It claimed that air refueling activities by U.S. military aircraft had shown a marked increase last month and suggested that the United States could be preparing for long-distance attacks against targets in the South China Sea.

According to the think tank study, multiple refueling aircraft had departed from U.S. military bases in Guam, and refueled the surveillance planes.

“It’s unusual for the US to dispatch fuel tankers from Guam [instead of from Kadena airbase in Japan] because such operations are uneconomical and inefficient,” the report suggested.

“Such operations are more probably preparing for future long-distance refuelling in extreme conditions, and thus deserve great attention,” the reported added. “This showed that the South China Sea region is still the US’ primary focus, but what is equally notable is that activities in the Yellow Sea region had a marked increase when compared with the sporadic activities two months ago.”

The South China Morning Post also reported that there had been thirteen reconnaissance flights conducted in the Yellow Sea and three to the East China Sea, which occurred when the Chinese military was conducting drills. In August, Beijing issued a stern protest after a U-2 Dragon Lady reconnaissance aircraft had flown over a so-called “no-fly zone” during a Chinese live-fire military drill in the Bohai Sea, the northwestern and innermost extension of the Yellow Sea.