Why Everyone Wants to Buy Russia's S-400 Missile System 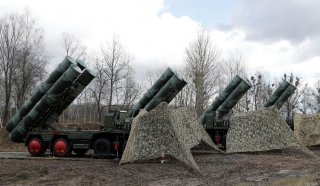 Here’s What You Need to Remember: The S-400 is seen as a significant improvement over its S-300 predecessor on several performance fronts. Whereas the S-300 was explicitly designed as a long-range air defense system, the S-400 is currently compatible with four missiles that are meant to satisfy a wide spectrum of operational categories.

The Russian Navy’s Black Sea Fleet announced this week that it held air defense and anti-saboteur drills in Crimea with its S-400 ‘Triumf’ anti-aircraft missile systems. Dummy ammunition and simulated explosives were used during a notional attack by adversarial “saboteurs.” The drills were meant to create a situation close to a combat environment.

“In the course of the air defense drills, the personnel of an S-400 ‘Triumf’ battalion practiced a set of measures to relocate positions and redeploy to an alternate area under the protection of Pantsyr-S surface-to-air missile/gun launchers,” the Black Sea Fleet’s press office said in a statement, as reported by Tass.

“During a march from the positioning area, notional saboteurs attacked the military column. The security and protection personnel within the column repelled the attack and eliminated the enemy,” added the press office. “After the march, the combat teams of the S-400 ‘Triumf’ battalion practiced a set of measures to detect, lock on and track control targets with their subsequent destruction by electronic launches.”

Russia has previously conducted anti-aircraft drills with the S-400 in recent months, including one earlier this year that reportedly involved more than 300 personnel from a regiment of the Central Military District. A prior drill last year involved more than 450 Russian personnel and some two hundred pieces of military hardware.

The S-400 is comprised of four core components: 1) the 30K6E battle management system, consisting of a command post and acquisition radar, 2) as many as six 98Zh6E Fire Units and twelve transporter-erector-launchers (TEL’s), 3) an assortment of surface-to-air missiles (SAM), and the 4) 30Ts6E logistical support system for missile storage and equipment maintenance.

Last June, it was announced that the Russian military would receive an additional three regiments of the S-400 anti-aircraft missile systems, along with four sets of the S-350 “Vityaz” battlefield air defense launchers by 2023 under new contracts with the Almaz-Antey defense manufacturer.