Why France Plans on Building a New Aircraft Carrier 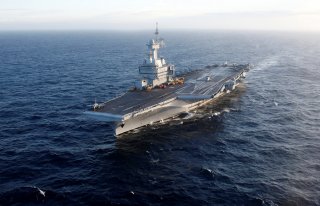 Key Point: Much like its namesake Charles de Gaulle, the French leader who brought France out of its post–World War II humiliation and restored it as a major power, the carrier is a symbol of French pride.

At the recent Euronaval conference, Defense Minister Florence Parly announced that France is planning to build a replacement for the French Navy's only carrier, the twenty-five-year-old Charles de Gaulle.

The new carrier would serve until 2080 and be capable of launching next-generation jet fighters. Parly said the French government will decide on the specifications of the ship later on.

“Key issues to be decided during the study period include whether or not the new carrier will be nuclear-powered like the Charles de Gaulle, and how to accommodate new combat aircraft being jointly developed with Germany,” noted French news agency Agence France-Presse.

The Charles de Gaulle is a forty-two-thousand-ton vessel powered by two nuclear reactors. It can carry up to forty aircraft, including French-made Rafale M fighters and U.S.-made E-2C Hawkeye airborne radar planes. The ship is armed with four octuple launchers for [M1] Aster 15 and two sextuple launchers for Mistral surface-to-air missiles, as well as eight twenty-millimeter cannon for point defense. It is equipped with C-13 steam catapults—also used by the U.S. Navy—to launch aircraft.

That doesn’t sound all that impressive compared to one-hundred-thousand-ton American aircraft carriers that carry ninety or so aircraft. Especially for the poor Charles de Gaulle, which has had its share of misfortunes, including its propellers snapping off.

But then, the Charles de Gaulle was always about more than military capability. “It cost more than they wanted, it took longer to develop than they wanted, and it had some mechanical problems,” Michael Shurkin, a researcher at the RAND Corp. think tank, told the National Interest. “But for all that, it works and it provided the French with what they needed.”

Much like its namesake Charles de Gaulle, the French leader who brought France out of its post–World War II humiliation and restored it as a major power, the carrier is a symbol of French pride. It is the only non-American nuclear-powered carrier in the world, although Russia and China are now developing nuclear carriers.

A single nuclear carrier does not make a navy, but it does convey a certain cachet. “They still aspire to be a major player,” Shurkin says. “Having a nuclear carrier really supports that ambition.”

A nuclear-powered carrier is also useful sustaining the vestiges of empire: France still possesses islands in the Caribbean, South America, the Indian Ocean and the Pacific. The French military has been heavily engaged in fighting Islamic militants in Africa. “They want to project force anywhere, and keep it on station all the time,” Shurkin says. “They want the freedom of movement that only a nuclear-powered vessel possesses.”

France’s military has evolved since the Cold War, from a large conscript-based army aimed at stopping a Soviet invasion, to an expeditionary force designed to project French power overseas, especially in Africa and the Middle East. As a nuclear-powered vessel that can operate for many years without refueling, the Charles de Gaulle proved useful, launching dozens of airstrikes against ISIS in Iraq and Syria.

Shurkin sees a few issues confronting the new carrier. The biggest problem with the Charles de Gaulle wasn’t that it was a bad ship, but rather that the French needed more than one carrier. A new carrier won’t solve the problem, given that it will be merely replacing an old one.

The Charles de Gaulle was also somewhat underpowered, so one question will be whether the French Navy will need to develop new reactors. Shurkin also expects the French to watch how Britain's new conventionally-powered Queen Elizabeth-class carriers will fare.

Ultimately, a new aircraft carrier will signal France’s determination to remain a major power, even if its military—as with so many other post–Cold War militaries—has been downsized. “They still want to be a world player,” Shurkin says. “They take seriously the idea that this requires an investment in hard power and not just soft power.”