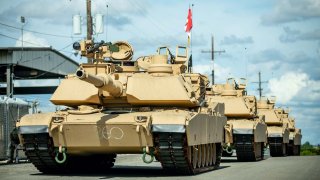 Here's What You Need to Remember: Whereas most arms import contracts are typically framed in diplomatically neutral terms, Błaszczak did not mince words in describing the reason behind Poland MBT purchase: "Of course this is a response to the challenges we face in terms of international security. Our task is to deter a potential aggressor. We all know where that aggressor is,” he said, in what is a clear reference to Russia.

This article was originally published a few months ago and is being reposted due to reader interest.