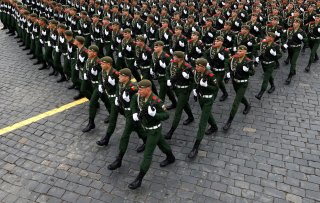 ​Here's What to Remember: Ukrainian defense officials have warned that a Russian attack will come as early as January, adding that an invasion scenario could include not only the Donbass region but amphibious landings at Ukraine’s Black Sea ports.

U.S. and NATO officials have warned in recent weeks about a new spurt of Russian military activity on the easternmost side of the Russian-Ukrainian border. According to the most recent estimates, around 90,000-100,000 Russian troops are arrayed along the border zone. Though this number is down from the roughly 150,000 Russian personnel who took part in Moscow’s springtime buildup, military experts and Western intelligence sources have expressed alarm over the “unusual” and “out of cycle” nature of the recent movements. The Kremlin’s full intentions remain unknown, which is the way Russian president Vladimir Putin likes it.

Ukrainian defense officials have warned that a Russian attack will come as early as January, adding that an invasion scenario could include not only the Donbass region but amphibious landings at Ukraine’s Black Sea ports. But it appears Washington has not ruled out that these activities may be part of a larger Russian pressure campaign to extract political or diplomatic concessions from the West. Still others maintain that a Russian invasion is neither imminent nor fictive but should instead be viewed as a serious military contingency. “Moscow is so positioned that they can move with very little warning,” John Herbst, a former U.S. ambassador to Ukraine and senior director of the Atlantic Council’s Eurasia Center, told NBC News. “They’re certainly threatening. And they’re in a position that if they want to, they can do it.”

In remarks offered at a NATO meeting in Latvia on Wednesday. Secretary of State Antony Blinken seemed to lend credence to the latter theory. “We don’t know whether President Putin has made the decision to invade Ukraine,’’ saidBlinken. “We do know that he’s putting in place the capacity to do so on short order, should he so decide. So despite uncertainty about intention, and timing, we must prepare for all contingencies while working to see to it that Russia reverses course.” Blinken met with his counterpart, Russian foreign minister Sergey Lavrov, in Stockholm on Thursday. Blinken repeatedly expressed the Biden administration’s concerns about “Russia’s plans for renewed aggression against Ukraine,” adding that Washington has “a strong, ironclad commitment to the sovereignty and territorial integrity of Ukraine.” Blinken called on Russia and Ukraine to recommit to implementing the Minsk agreements, a beleaguered peace deal outlining a path for the reincorporation of the eastern separatist Donetsk and Lugansk People’s Republics (DPR and LPR) back into Ukraine. The Kremlin responded by reiterating its long-held position that Moscow has no commitments under the Minsk accords, and that any and all negotiations are to be conducted solely between Kiev and the separatist republics. Lavrov did not appear to comment directly on U.S. concerns over Russia’s military buildup in his public remarks. Blinken dismissed concerns, previously voiced by Kremlin officials, that Ukraine could be preparing to launch a major offensive against separatist republics. “Ukraine is in no way posing a threat to Russia, or seeking a confrontation that would justify a Russian military intervention. The only threat is that of renewed Russian aggression toward Ukraine,” he said.

The Biden administration says it is ready to impose “high-impact” sanctions in the event of a Russian invasion of Ukraine, a claim echoed by NATO secretary-general Jens Stoltenberg. “We all made it very clear that there will be a high price to pay and, and sanctions is one of the options,” Stoltenberg told Reuters earlier this week. These prospective sanctions will likely include measures aimed at cutting Russia off from the SWIFT global transaction system, a move that some experts say will deal a significant short-term blow to Russia’s economy.

Kremlin officials continue to maintain that Russian military movements are not premised on aggressive intent, and that Russia has the right, in any case, to shuffle its troops within its borders as it sees fit. “The movement of our military equipment or army units across the territory of the Russian Federation is exclusively our business,” Kremlin spokesman Dmitry Peskov told reporters. “Russia has never threatened anyone, is not threatening, and does not pose a danger to anyone.”

Nevertheless, Moscow has steadily sharpened its rhetoric vis-à-vis Ukraine since President Joe Biden assumed office in January. In a lengthy historical essay published this summer, Putin suggested that post-Soviet Ukraine cannot and should not exist outside the Russian sphere of influence. Putin and top Moscow officials have long maintained that Ukraine’s accession to NATO is a bright red line for Moscow, but the Kremlin’s phrasing has shifted slightly in recent months. “You asked about Ukraine, where are these red lines?” said Putin at a recent investment conference. “They are above all in the creation of threats to us which could come from [Ukraine].” Putin’s emphasis on threats “from Ukraine,” rather than on Ukraine’s foreign policy course, reflects the growing fears of Russian officials that Ukraine could opt to unilaterally host NATO military infrastructure without formally joining the alliance.

“If some kind of strike systems appear on the territory of Ukraine, the flight time to Moscow will be 7-10 minutes, and five minutes in the case of a hypersonic weapon being deployed,” Putin said, adding, “What are we to do in such a scenario? We will have to then create something similar in relation to those who threaten us in that way.”

The Ukraine crisis is likely to be at the forefront of the topics discussed by Biden and Putin in an upcoming phone conversation that is reportedly being planned behind the scenes by Moscow and Washington. According to Putin’s foreign affairs adviser, Yuri Ushakov, the Russian president is expected to press Biden on concrete negative guarantees regarding eastward NATO expansion and the “deployment of weapons systems that would threaten us [Russia] on the territories of neighboring countries, including Ukraine.”