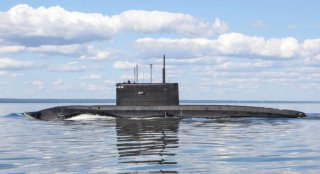 Here's What You Need to Remember: Though difficult to confirm, there are indications that the Russian Navy may eventually build and commission as many as five more 636.6 submarines, bringing the number of Russia’s most advanced submarines to twelve or thirteen. Russia’ black holes are ready to multiply it seems.

The Russian Navy just commissioned the Volkhov, their newest Kilo-class submarine, Jane’s reported. Originally laid down in mid-2017, the submarine was built and commissioned in less than four years. And it may be one of the quietest submarines in the Russian Navy.

The Soviet Navy designed the original Kilo-class tranche, also known as Project 877 submarines, in the early 1980s for anti-submarine and anti-surface warfare in shallow coastal waters. To that end, the Kilo-class is generally smaller than Russia’s massive ballistic missile submarines, so-called boomers. Since inception, the Kilo-class has been steadily improved and is represented by three variants: the Project 877, Project Project 636, and the latest Project 636.3.

While a number of the original Project 877 variants are still in Russian Naval commission, quite a few of them have been either decommissioned or sold to other countries, including India, Iran, Algeria, Romania, Poland, and China. Likewise, Project 636 submarines, the middle of the three variants, remain in service in other country’s navies—again Algeria, Vietnam, and China. When it comes to the latest and most advanced Kilo-class variant, the 636.3, Russia remains the sole operator.

Project 636.3 submarines are perhaps Russia’s top-of-the-line non-nuclear submarines, with the Volkhov being the newest of the new. The small submarine’s fifty-two-man crew can fire torpedoes via the class’ six torpedo tubes, as well as a variety of land-attack or anti-ship missiles and some surface-to-air defense missiles that can be fired from the submarine’s torpedo tubes while submerged. The class’ greatest asset however is not its onboard firepower, but rather its extremely low noise signature.

Colloquially known as “black holes” the improved Kilos feature a number of improvements over their predecessors. In addition to a slightly longer hull, a correspondingly greater displacement, and a greater, 7,500 mile range, the 636.6s are said to be equipped with quieter engines that further lower their acoustic signature and are particularly difficult to detect.

Anechoic tiles further reduce the class’ acoustic signature. Essentially rubberized tiles impregnated with air bubbles or gaps, this specialized naval equipment is mated to submarine hulls in order to absorb enemy sonar and prevent pings from returning to submarines on the hunt. Though such polymer tiles do not make submarines invisible, they are estimated to reduce sonar bounce back by up to 10-15% in certain conditions.

Though difficult to confirm, there are indications that the Russian Navy may eventually build and commission as many as five more 636.6 submarines, bringing the number of Russia’s most advanced submarines to twelve or thirteen. Russia’ black holes are ready to multiply it seems.

Caleb Larson is a Defense Writer with the National Interest. He holds a Master of Public Policy and covers U.S. and Russian security, European defense issues, and German politics and culture. This article first appeared last year and is being republished due to reader interest.