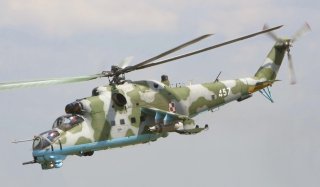 Here's What You Need To Remember: In the air-to-air mode, the Hind can use its nose-mounted cannon and unguided and guided rockets to attack enemy helicopters. It’s arguably easier for a helicopter to attack another helicopter than it is for a supersonic fighter plane to do so, as the plane’s high speed can make it difficult for the pilot to get a clear shot before he passes overhead.

David Axe serves as Defense Editor of the National Interest. He is the author of the graphic novels  War Fix, War Is Boring and Machete Squad. This article is being republished due to reader interest.